We’ve all seen Disney princesses as those gentle, lovable, and fascinating characters that can’t be associated with anything unpleasant. Their opposites in the movies were shown to be those evil characters who were afraid to bring down these princesses and ruin them. Ever wonder what these princesses would look like if they were evil and dark? How would your appearance change?

Jeffery Thomas, a California-based cartoonist, and designer, has incarnated some images to quench our imaginations. Along with him, another talented artist, Dan LuVisi, has also created some brilliant works of art around our favorite childhood characters.

Scroll down and see how much Thomas’s imagination matches yours. You can also check more of his work on his blog. 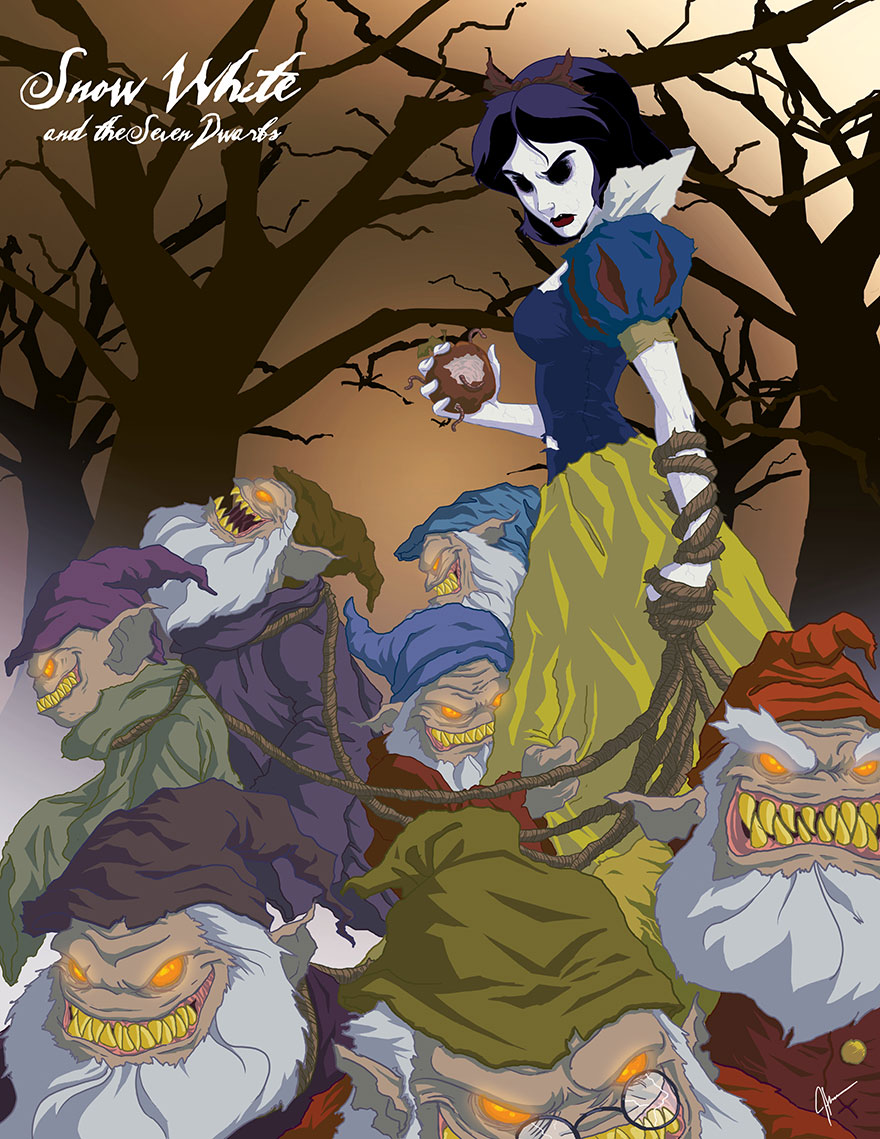 Imagine how this poster could change the whole story of this story. The Snow White would be an evil character with malicious intent, that she would use the seven dwarves and her companions to spread damage. I have to say those black eyes are scaring me! 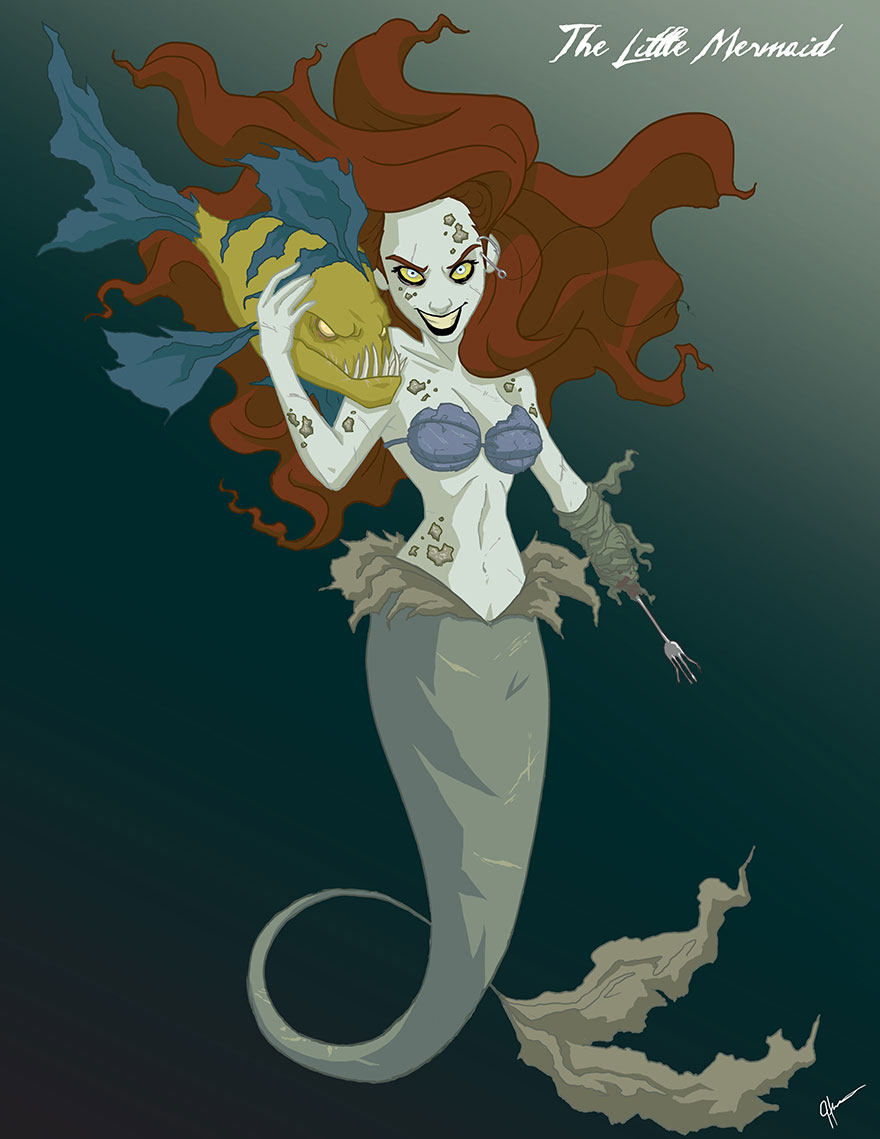 Not only did Thomas turn the little mermaid into a goth who looks like she just came out of her grave, but he also changed the appearance of our innocent fish Flounder into a mortal one. 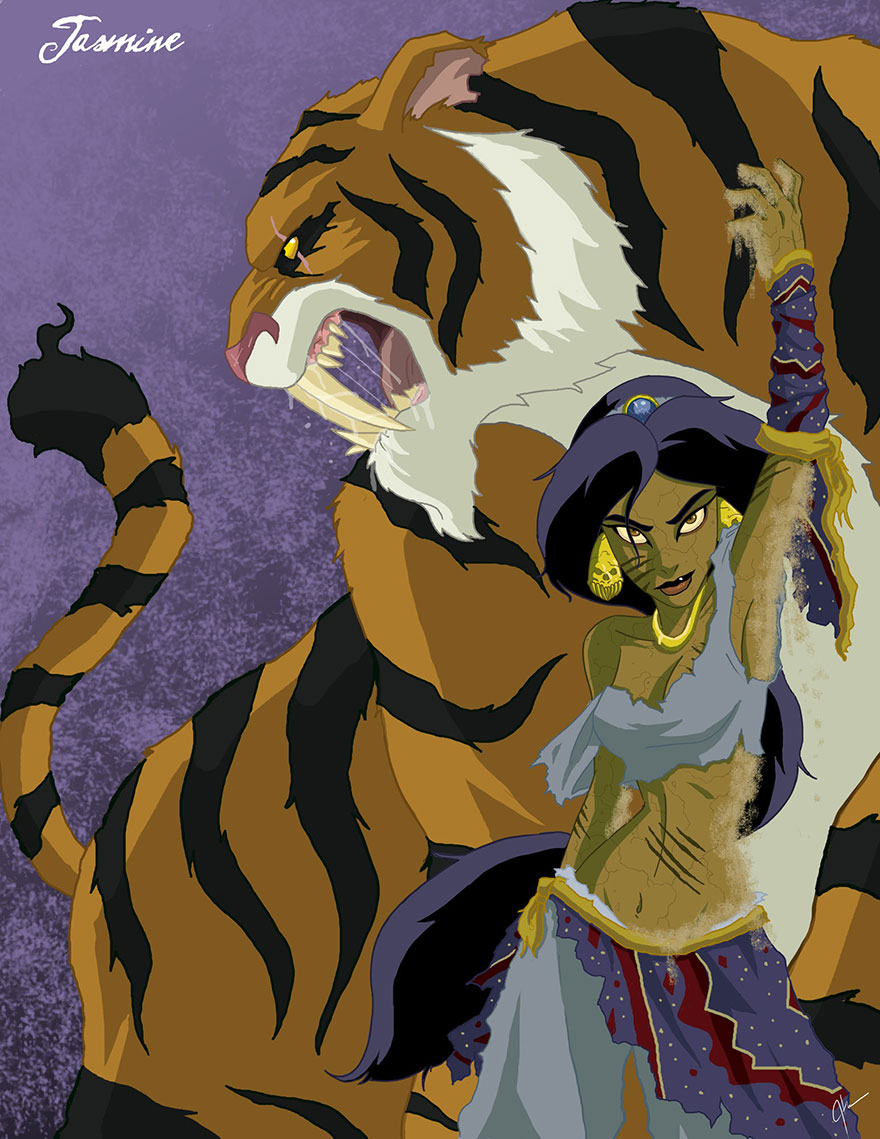 This has to be the most iconic among all the evil princesses. The addition of cheetahs and those skeleton earrings would scare anyone away. And did you notice the scratches on the belly and the protruding tooth? Watch out for princess jasmine!

#4 Belle, Beauty and the beast 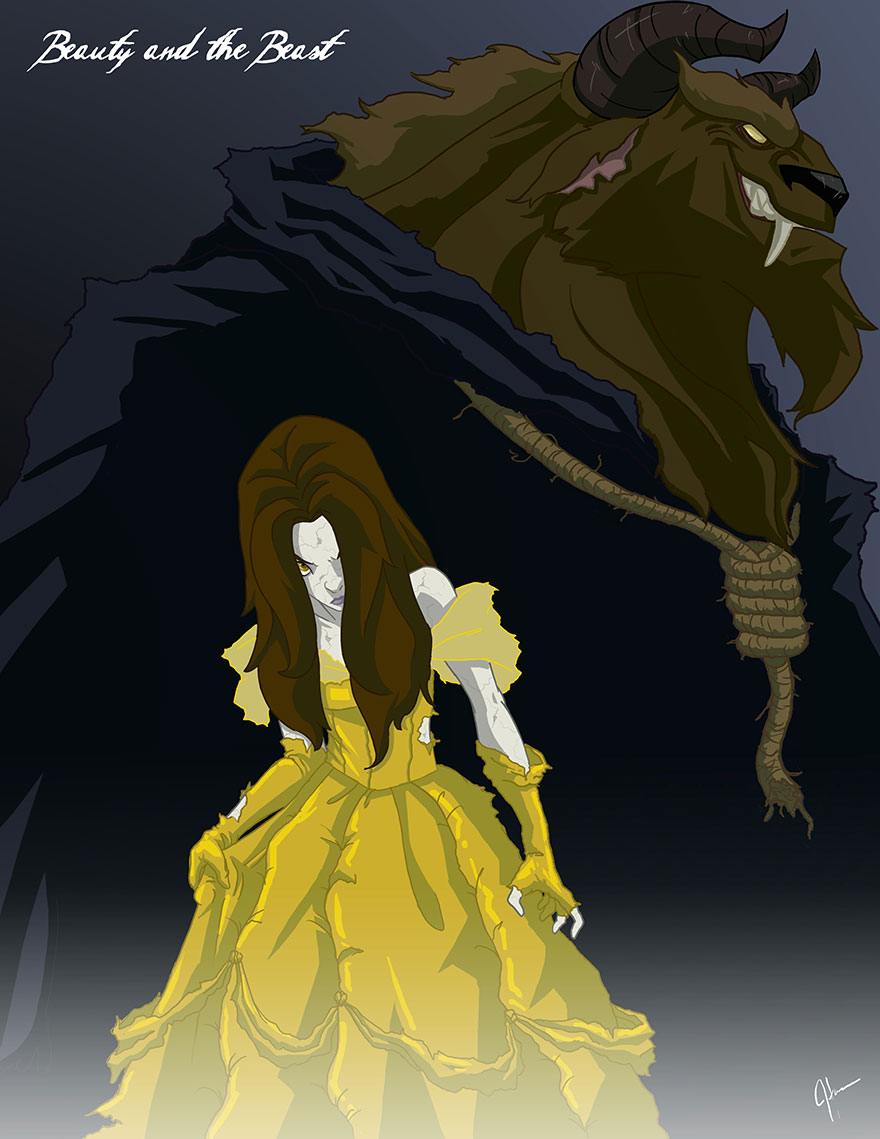 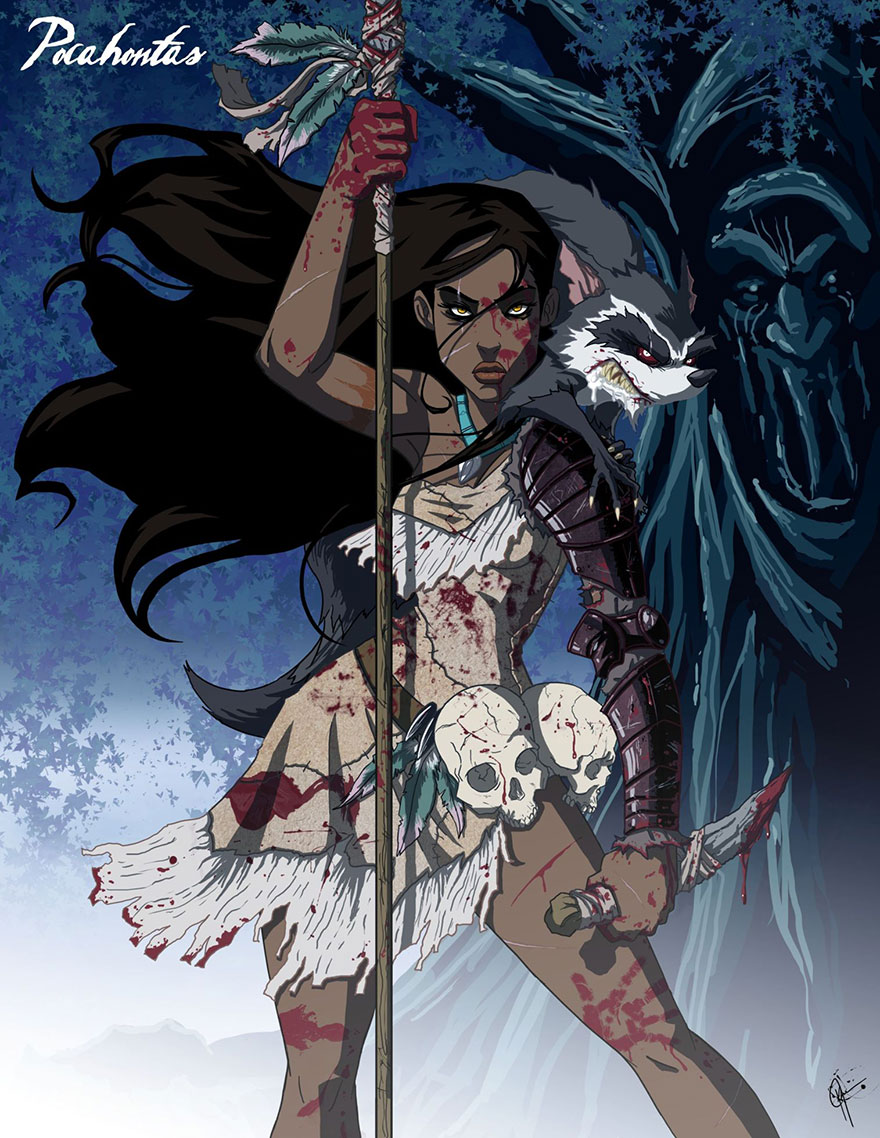 If you were thinking of asking Pocahontas for help, forget it. She has surrendered to the dark forces. And it is not just her, Grandma Willow will be with each step to advise and correct the step of Pocahontas. Thomas did very well with the bloodstains and skeleton heads. 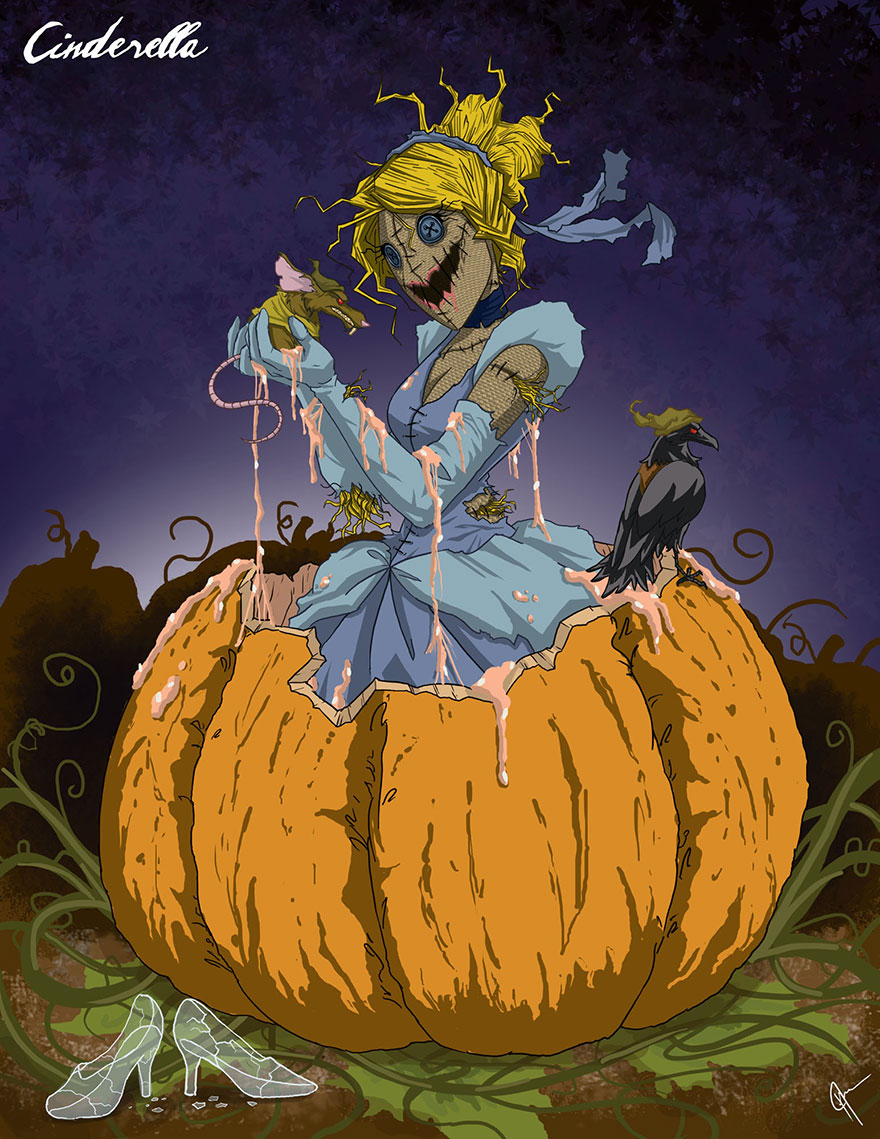 Cinderella couldn’t have gotten scarier! She is barely recognizable. You may not have noticed, but she is holding the mouse Gus in her hands. Thomas has truly dug up even the most innocent characters and turned them evil.

The cute pink princess is long gone. She meets the zombie aurora, she slept well in her grave but she has reawakened and she will not spare anyone. No one can escape his anger 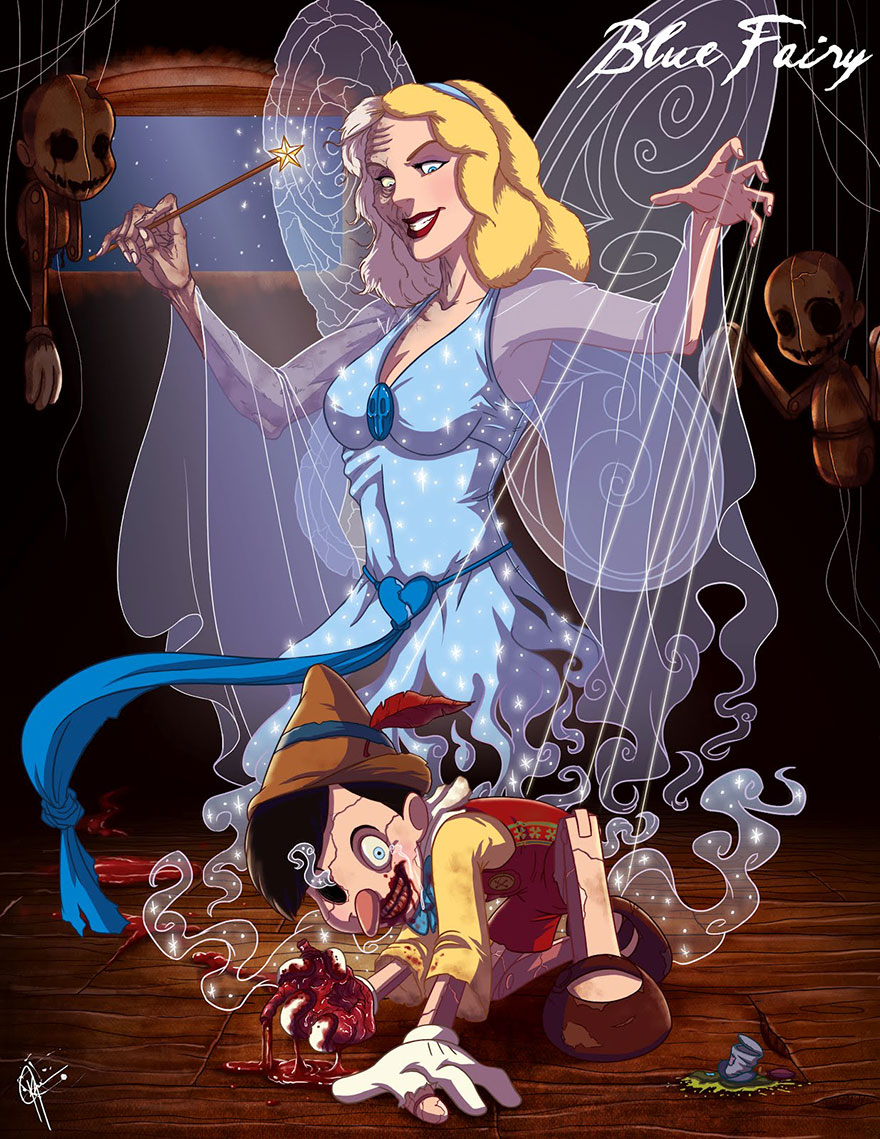 Time is running out and your time will come. When the needle reaches 12, Alice will come for you. Meanwhile, she sucks the blood of the people who fell victim to her fury.

#9 Esmeralda, The Hunchback of Notre Dame 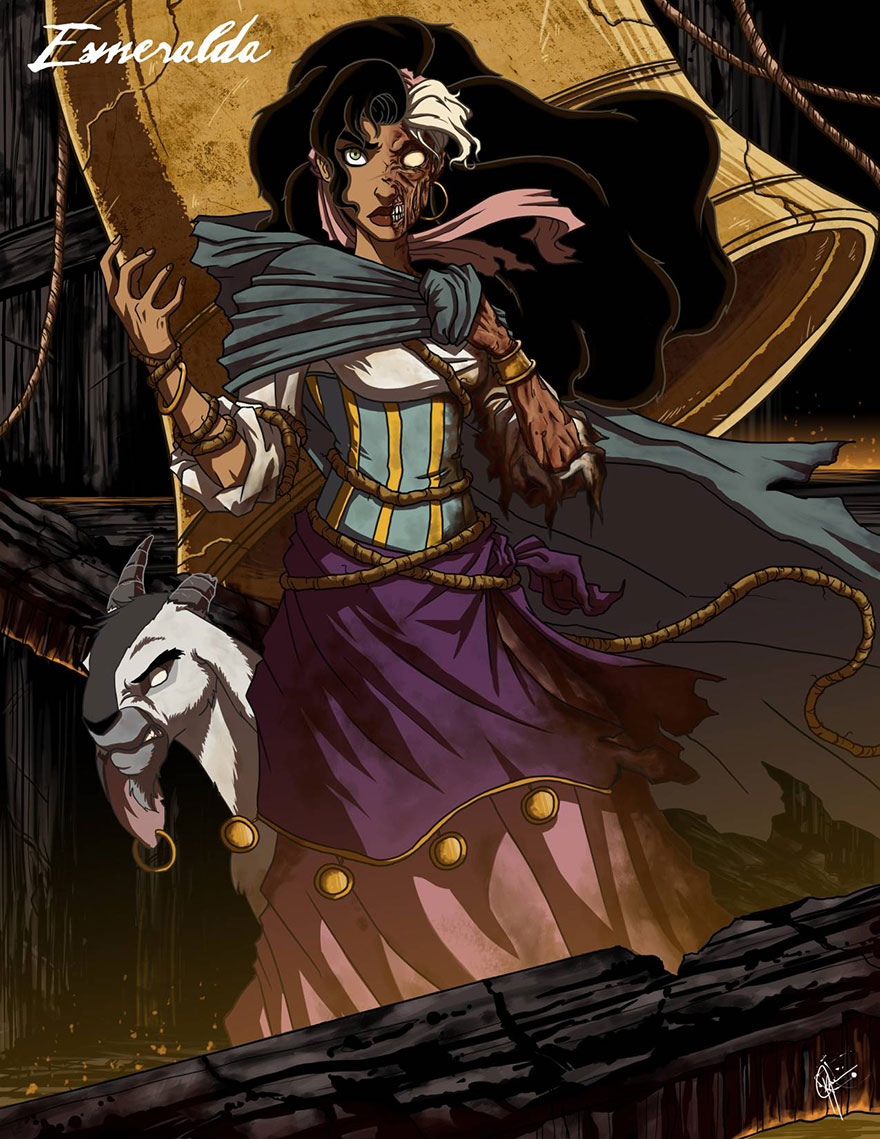 Although Esmeralda still looks as ravishing as ever here, she is not the same. Jeffery Thomas really brought out his creativity in this one. The half-burned face and a burned arm are giving us the feeling of Mufasa from the Lion King! 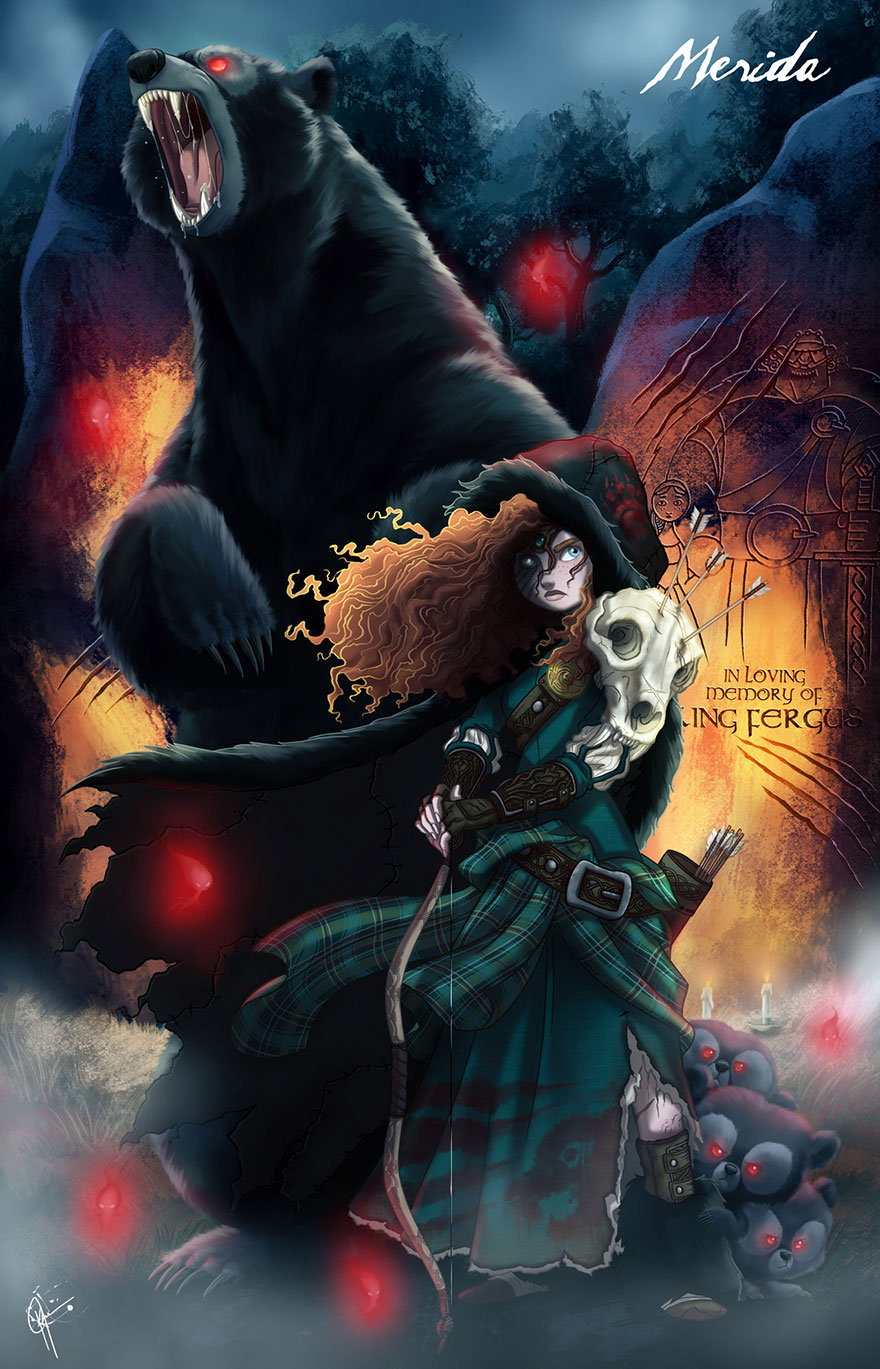 Merida was always strong and powerful, but was that enhanced by the powers of evil? We would have the most fearsome character in this series 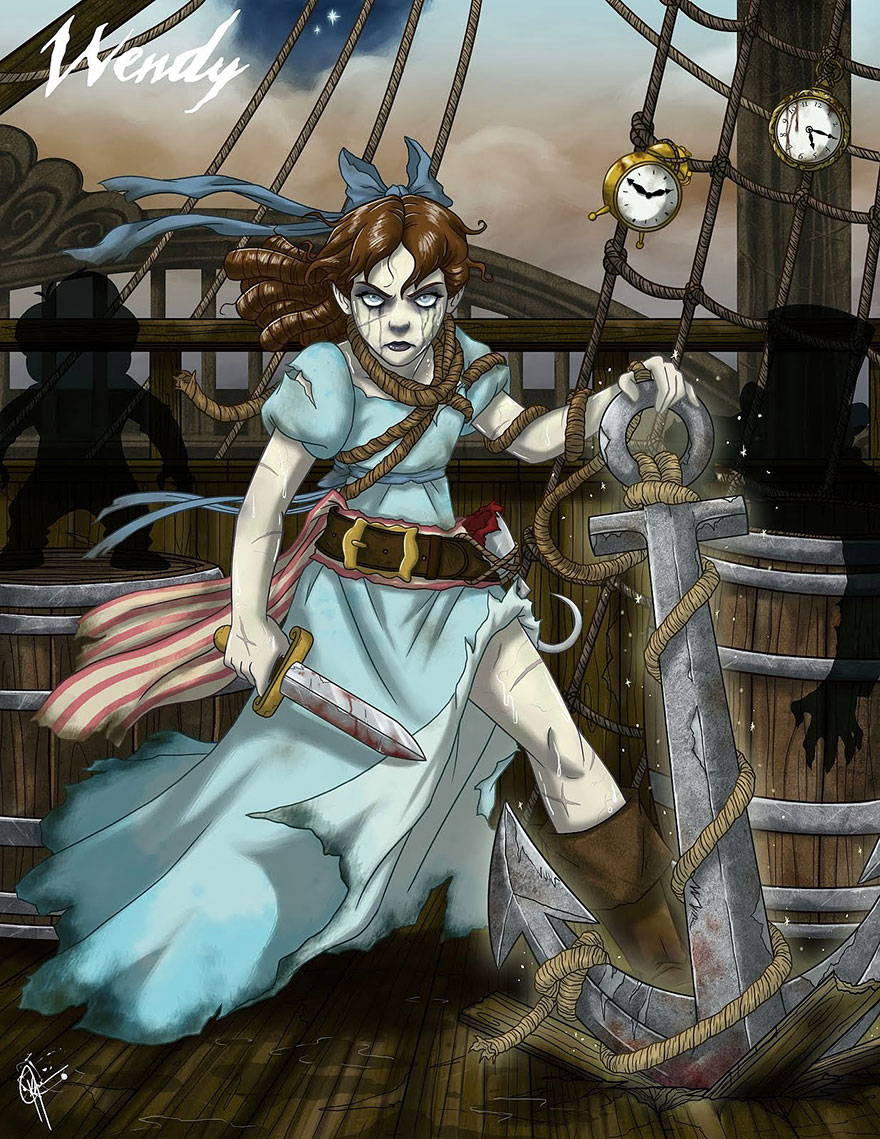 Oh, Wendy, we thought Jeffery would forgive you! 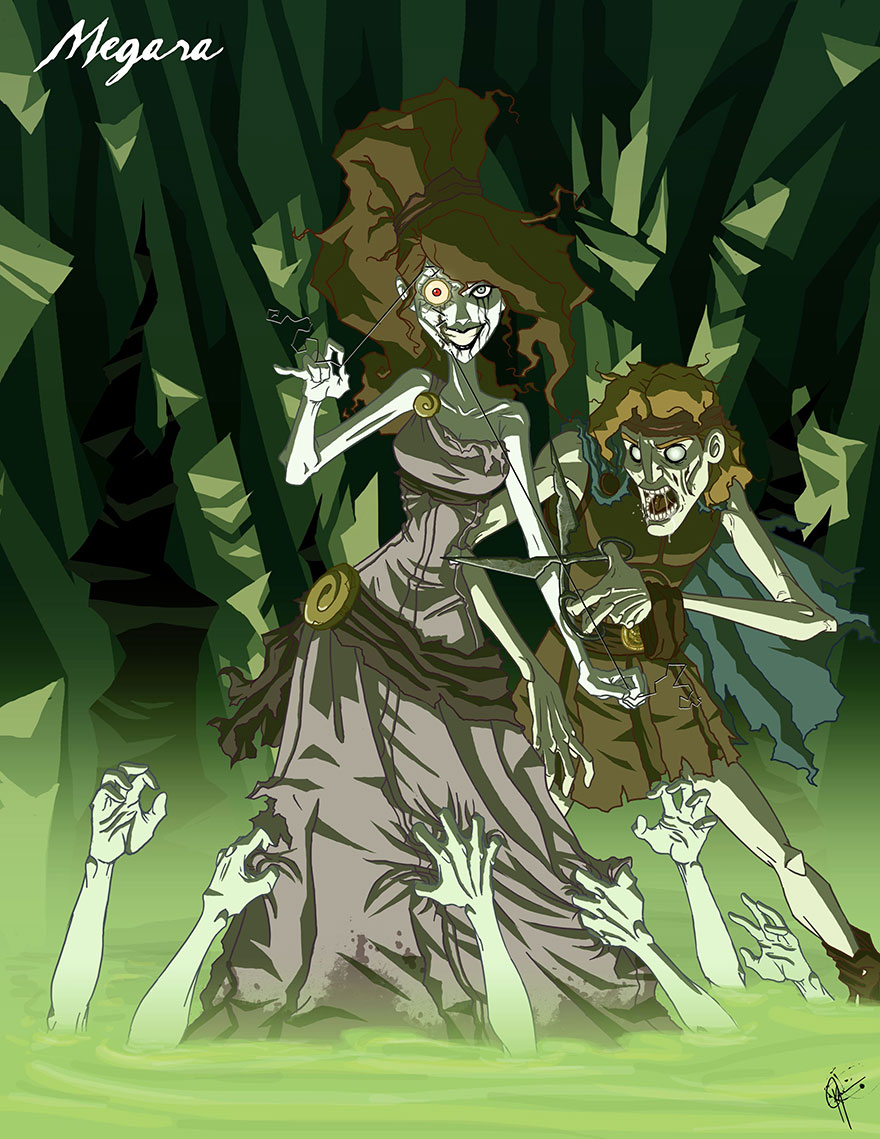 That’s the creepiest version of Megara I’ve ever seen.

#13 Tiana, Princess And The Frog 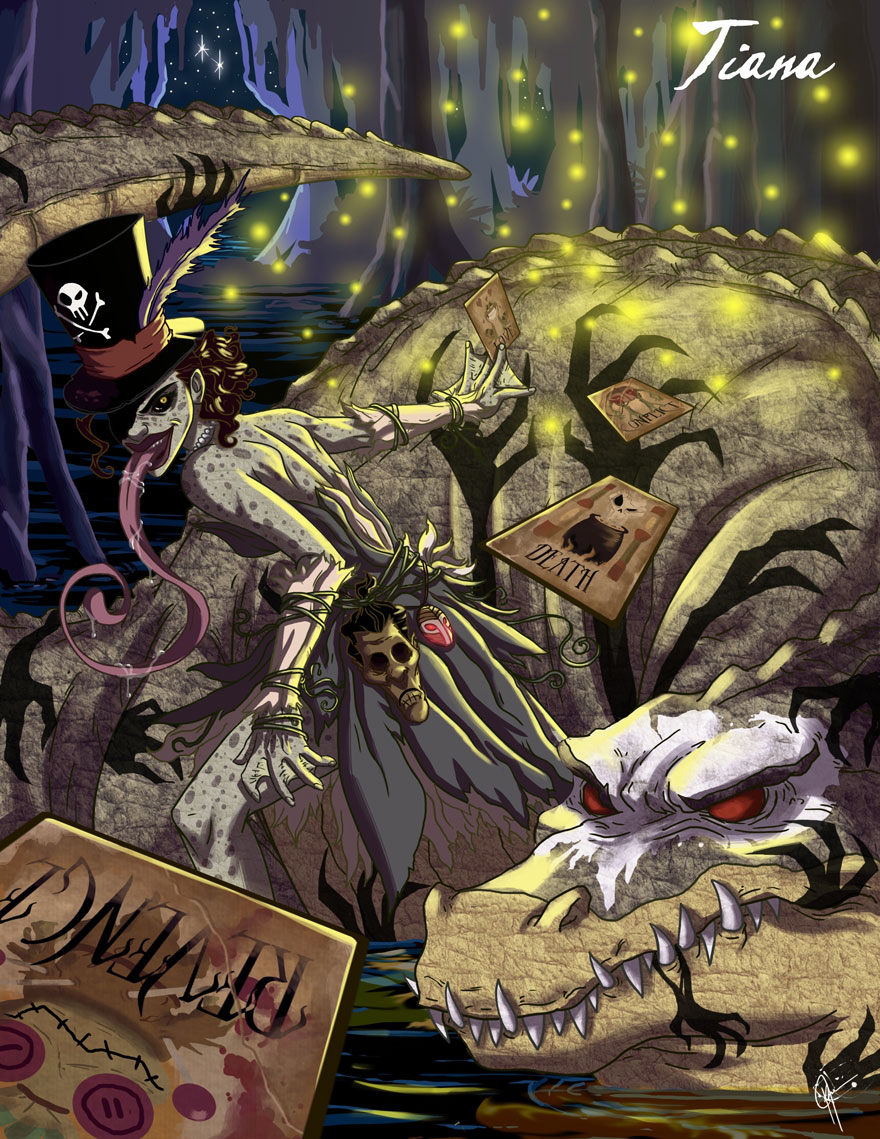 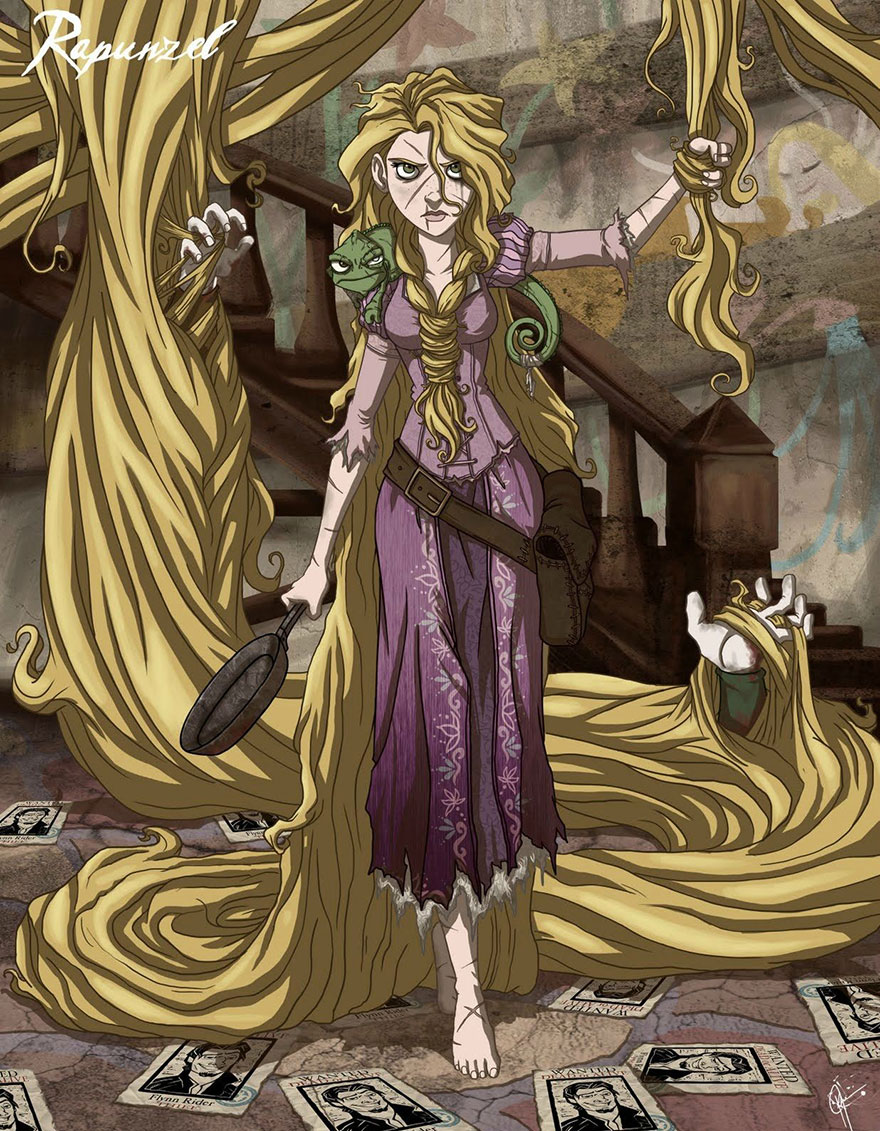 You better not help her escape. Oh! 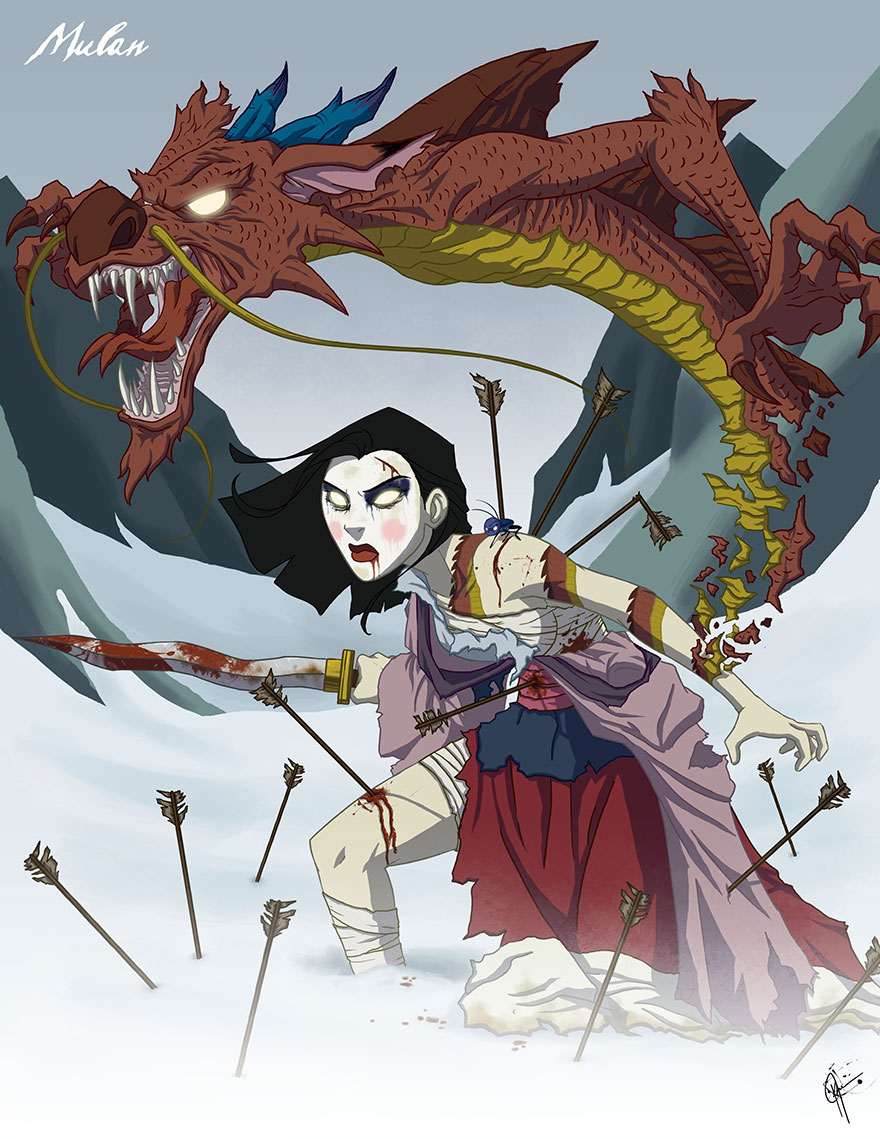 Who will save people from this creepy version of Mulan?

Is this how you envisioned your favorite characters in evil garb? Or do you think she could have done better? Let us know if this filled in the gaps in her imagination!