Upon seeing a handicapped dog wandering the streets of Kentucky alone, a good Samaritan called on animal control to help her. When they arrived, they realized that the animal had neither its nose nor its upper lip. This deformity was not caused by an injury, she was simply born that way. 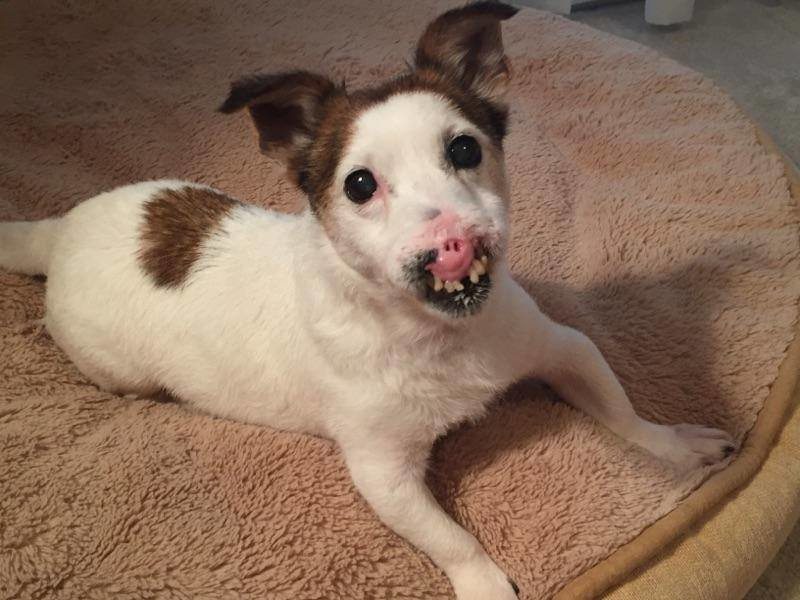 The dog was taken to the medical center where a veterinarian evaluated her. She was about 9 years old and was full of breast tumors. She also had a hernia and serious dental problems, aggravated by the exposure of her upper teeth. The animal was transferred to the Woodstock Animal Foundation (WAF) and was awaiting advanced medical care, but needed donations.

WAF posted the story of the warrior dog on its Facebook page and managed to raise about $ 6,000 in donations, exceeding the goal needed to cover its medical expenses. When local news broadcasters heard about the dog’s life, they knew they had a great story in hand – ‘a homeless puppy who didn’t allow her past or disability to diminish her spirit’.

Kelli Shook, from Ohio, was watching the news and, luckily, took notice of the dog. “I don’t know what it was, but there was something in my heart that I knew was perfect,” said Kelli. She is very friendly, going to everyone, without fear of other animals, without fear of people. She’s great with kids – she absolutely adores kids. Kelli is a coach and life counselor who works with children. She knew that Mirabel (the dog’s name) would inspire her clients. She could inspire anyone!

“We are starting a youth program here in our area, where we can teach children empathy using animals that are not traditionally considered ‘normal’ or lovable,” said Kelli. The woman admits that Mirabel’s face can be shocking to see at first. Even their own children had an initial scare, but they get over it quickly. In a short time, the children got used to it and now they think it is very cute, said the coach.

Mirabel and Kelli teach young people that everyone deserves affection and kindness in the same way, no matter what they are like or where they come from! Although Mirabel is not in good health, her cheerful spirit says otherwise. Kelli also believes that his nose works very well because the dog is motivated by food and loves to receive treats.

We are not sure how long she will be here, but we are going to make the best of the second half of her life and help other children in the meantime, said Kelli. The brave little dog that has been on the streets for so long, will now spend the rest of her life with a family that loves her regardless of her appearance! Did you like the article? Share this article. This helps us to spread good content on social networks. Thanks!