A 17-year-old kid abandoned three-month-old puppies in a park and one of them, Trooper, had the bad fortune to wander until he reached the train tracks. The poor dog was hit by the train: he lost his hind legs and an eye. But Trooper, despite having lived that drama, despite the operations and the fear that must have happened, has not only come forward but now he, with his positive and happy energy, helps people who have some type of disability. 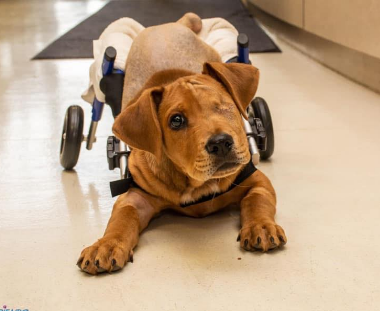 Now the dog visits hospitals and all kinds of places with his family, who also takes the opportunity to raise awareness about the work of the protectors who go out of their way like dogs like Trooper, to dogs that need extra help.

This mongrel madcap, as you will have seen, became famous when he was rescued after the devastating odyssey he faced when he was little and now there is no one to stop him, especially since his family is willing to spend as much time as he needs.

Trooper wastes happiness: he does not know that he is different, he only knows that he is loved. And it is, precisely, what transmits to the humans that it knows every day.

PS Here you can see the photos of when Trooper was welcomed by the Humane Society, before becoming adopted, so you can see what this great little dog has been able to recover from.

Facebook
Twitter
Pinterest
WhatsApp
Previous articleStunning images of a porcupine’s attack on a Pit bull dog
Next articleHe lost hair, was invisible and had bacteria: Ralph fought until his fur shone again