Unfortunately, not all dogs in this world have a wonderful opportunity to sleep in a warm bed, eat well, and be loved by a family. Some poor people end up lost in the streets, looking for garbage to eat. The luckiest among them end up in shelters, where at least they have someone to care for and feed them. And although many of them finally find a home there, those who are adopted are usually the most adorable, charming, and handsome.

But despite the appearance of a dog, everyone deserves a chance. Especially those who have not had a good life. One of them is Phoenix, a dog rescued from Oklahoma with a very particular appearance.

According to the Skiatook Paws & Claws Animal Rescue Center, the dog was found wandering the streets of Collinsville, searching for food, before being picked up by his rescuers. It seems that Phoenix had someone to take care of him before, but he had been a-bandoned.

In November this dog was found and rescued, wandering the streets of Collinsville 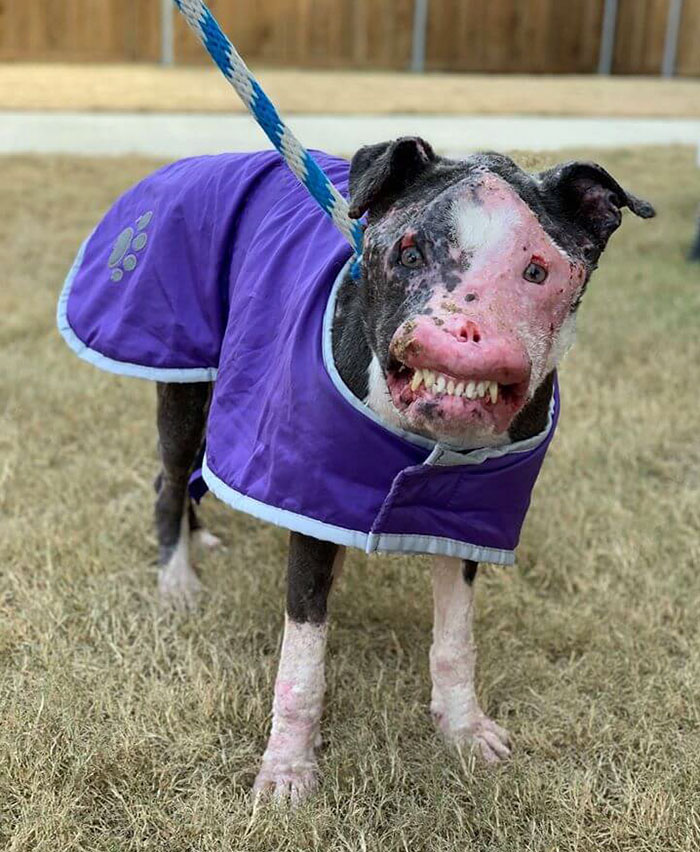 After rescuing him from the streets, the Owasso Veterinary Center in Oklahoma took charge of him, and they immediately provided information about it:
We are investigating all possible causes for the state of Phoenix and doing laboratory tests to identify the causes of her skin disease. We are bathing him frequently and he is taking medicine to improve the health of his skin and make him feel more comfortable. ” 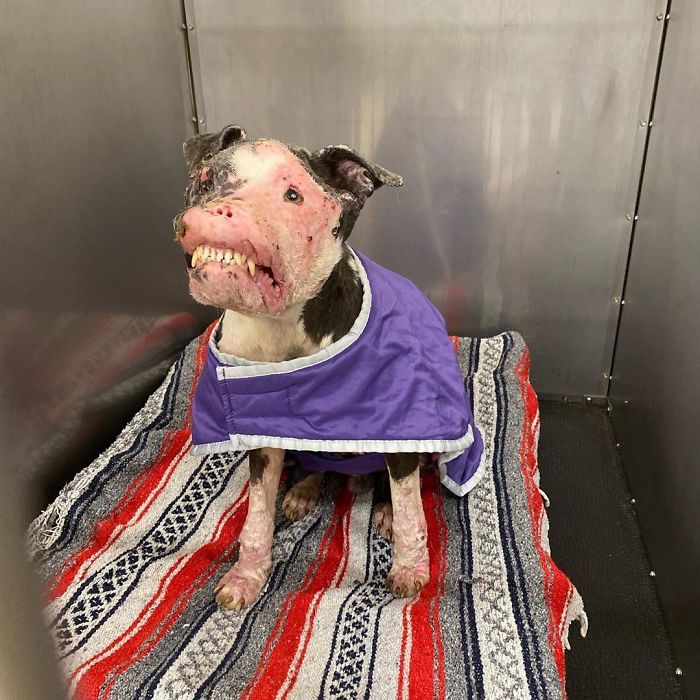 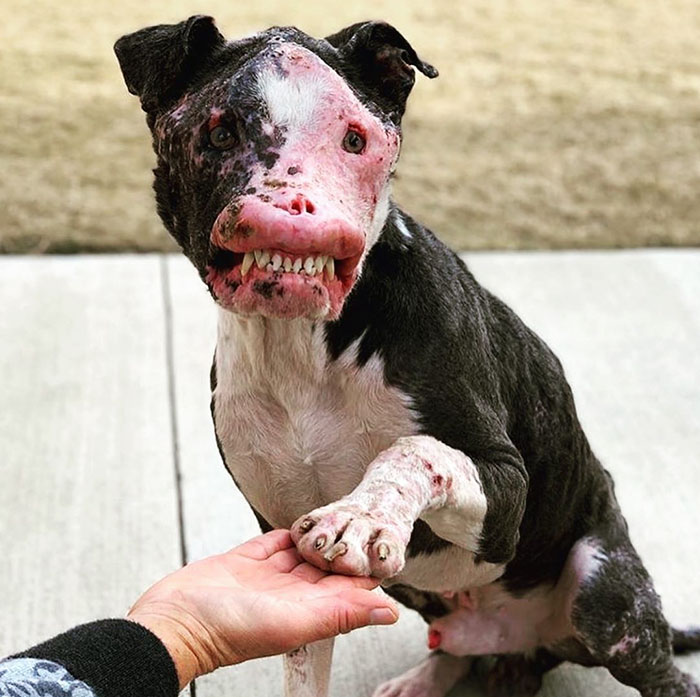 Although Phoenix appears to have been through terrible abuse, the vets who are treating it don’t want to rush to those conclusions:
“We have evidence of the progress of Phoenix’s facial deterioration. It may be a disease that causes it. It is important not to assume that it is the result of malicious acts. Animals without shelter or proper care, without shelter, food or water face many obstacles, especially if they have underlying health problems. ” 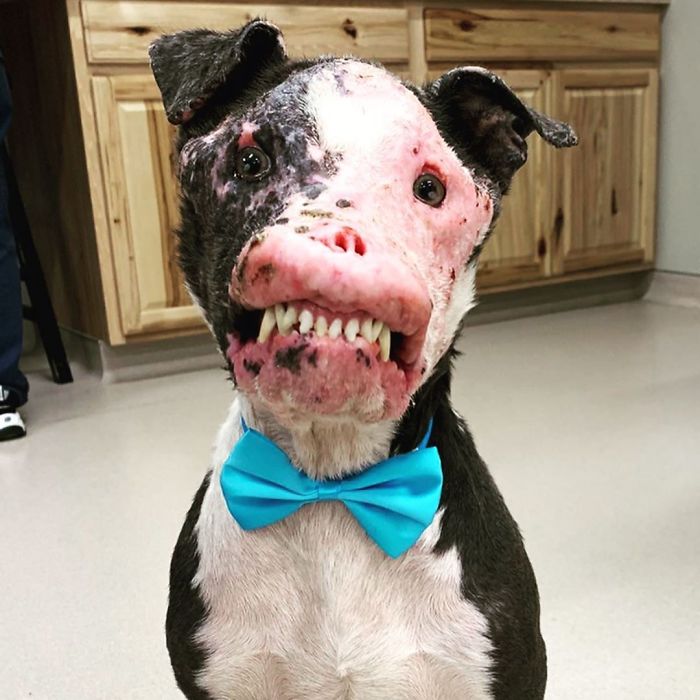 After doing several tests, they discovered that it is an autoimmune disease 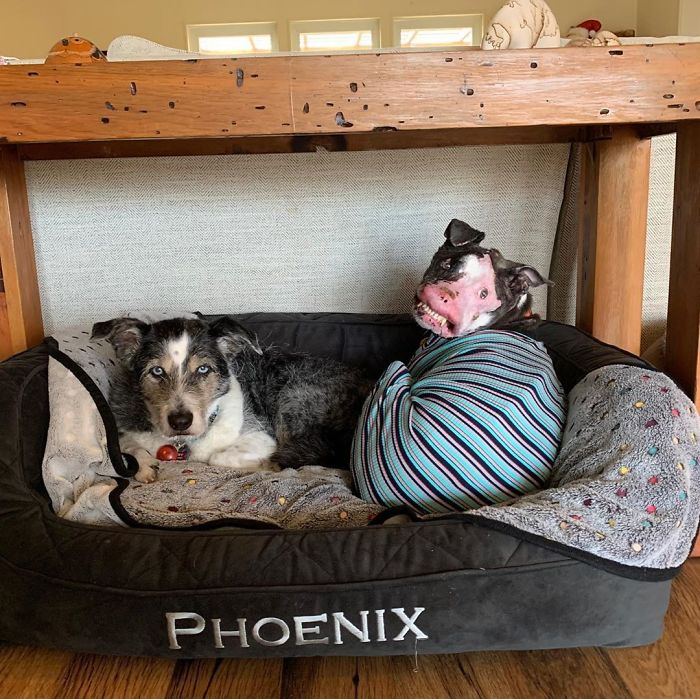 The most recent update is from a few days ago:

Phoenix traveled to Kansas, where she met veterinary doctors specializing in skin conditions: Dr. Trainor and dr. Senter. We sent them a biopsy of their diseased skin and they looked at it under a microscope to see its behavior. After taking the dog there, Phoenix does not stop improving: He has gained weight, his skin is healing, he plays and barks, he chases balls … He even sleeps in his bed. The grimace on his face will not go away, and the muscles in his head will not return. Sunlight causes skin problems, so you should bring clothing and sunscreen, but not to worry, because the dog is strong.
Phoenix suffers from a rare autoimmune disease, Systemic Lupus Erythematosus (SLE). There are no specific tests to identify it, it is only diagnosed when the other diseases have been ruled out. Since it is autoimmune, its own body attacks itself, making treatment sometimes difficult, but thanks to all vets, we now have the disease under control.
Thank you all for your support and encouragement. Phoenix would not have done it without you. ” 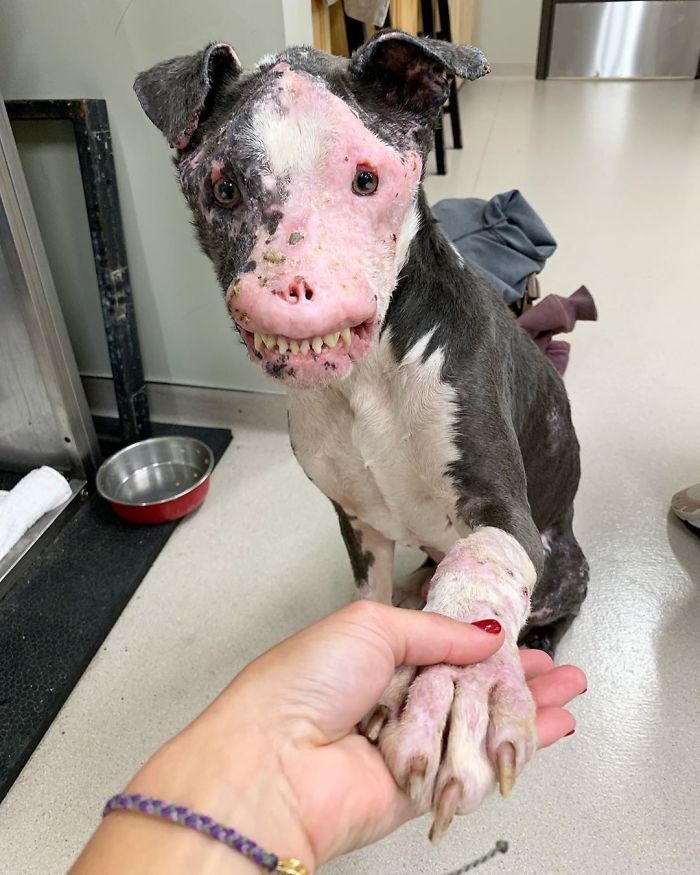 At the moment Phoenix is being cared for and receiving medical attention, and appears to be recovering fantastically. Skiatook staff share updates about the dog, with photos and videos. 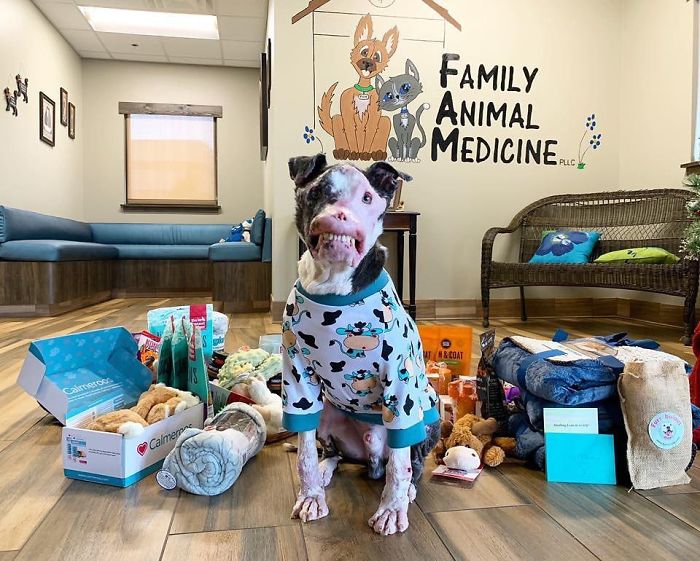 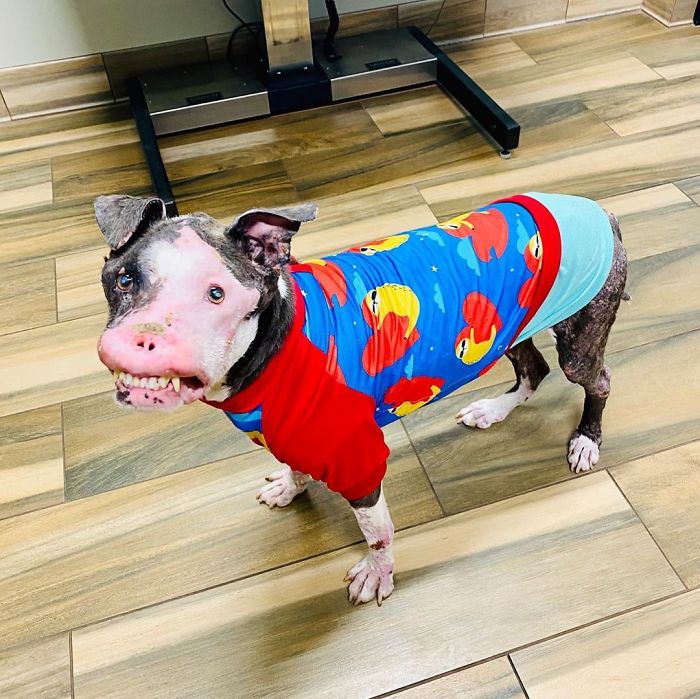 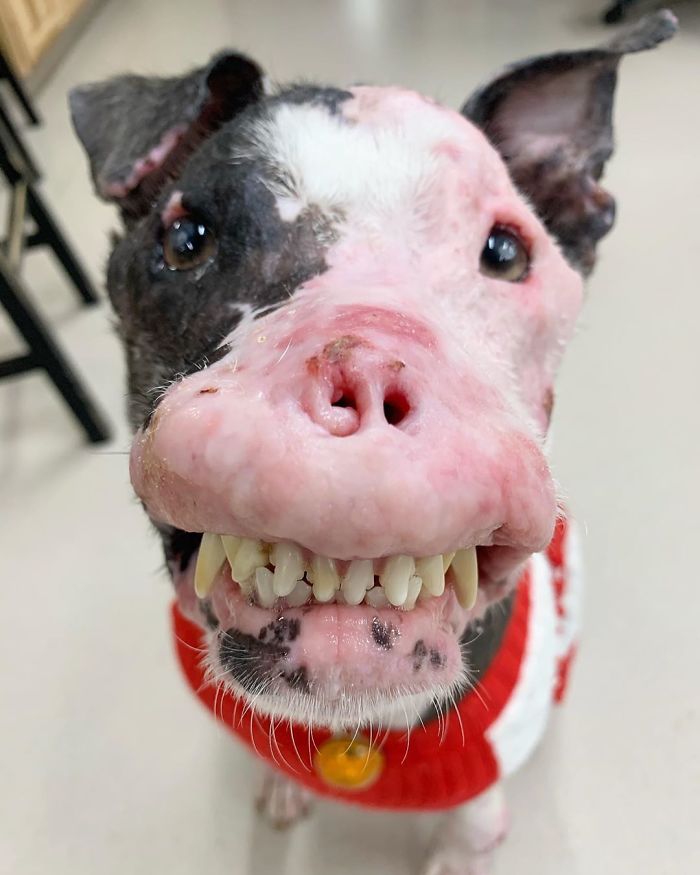 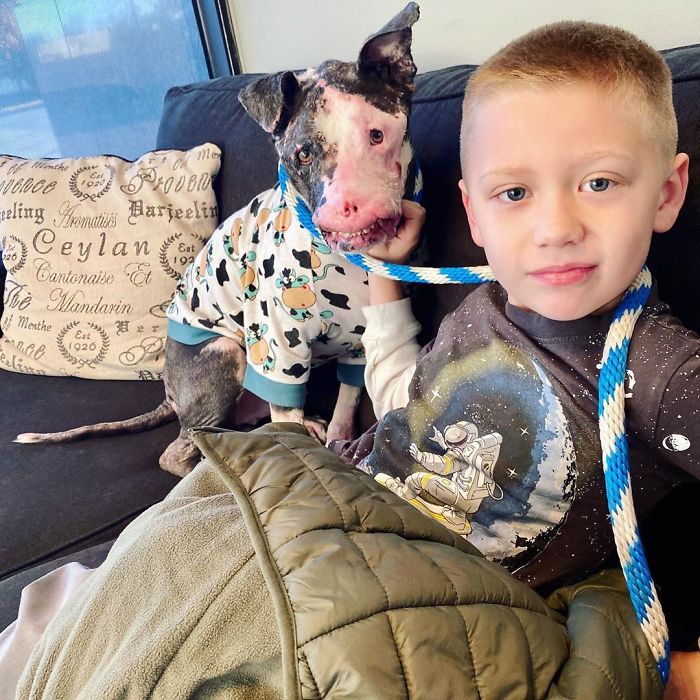 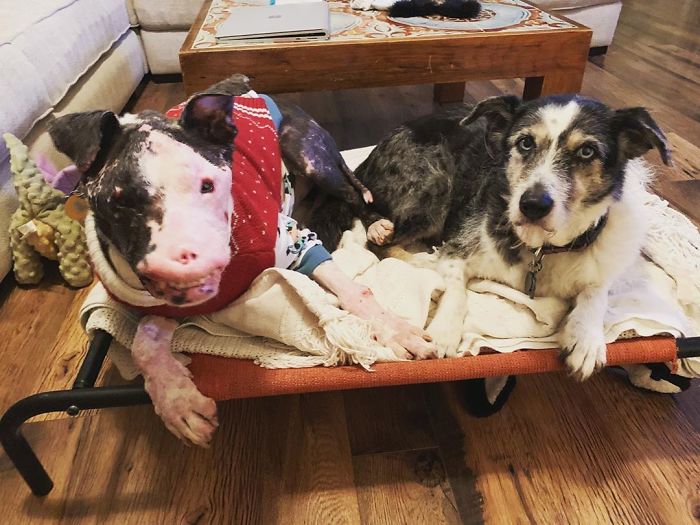 When Phoenix is ready to be adopted, they will announce it. Meanwhile, you can follow her Instagram to find out about her condition or donate money for her care by clicking here. 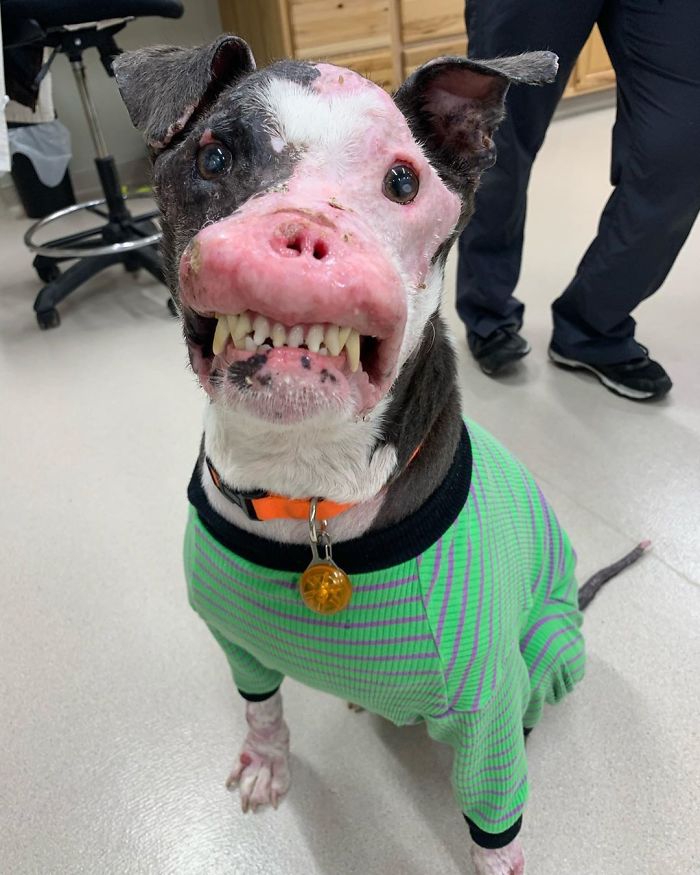 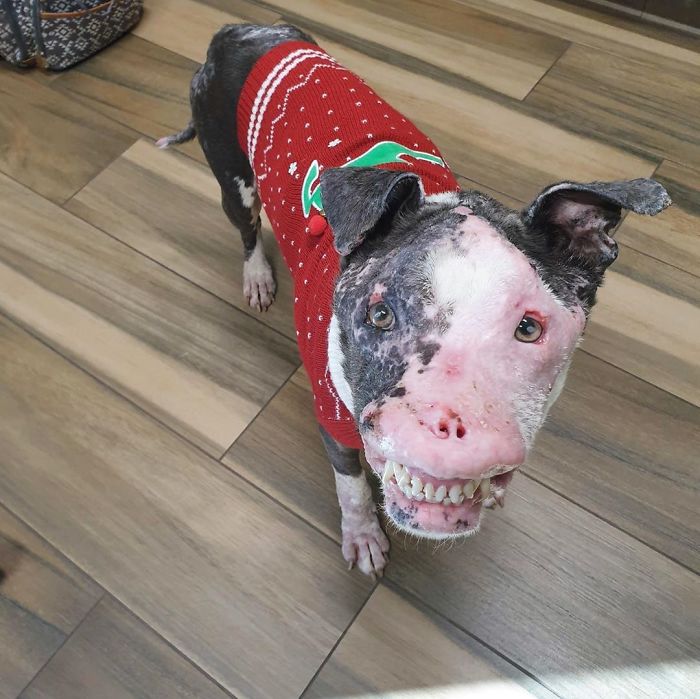 How people reacted to the Phoenix story