This deaf, blind and elderly puppy lived the worst months before leaving because of its owner

The story of this puppy named Brandy is one of the saddest cases of neglect. For this Fox Terrier crossing there was no second chance or happy ending, as their rescuers arrived too late and the best option was to end their unmerited agony. Brandy lived alone in a property in Adelaide, Australia, in which his owner had left him locked up to defend his fate. 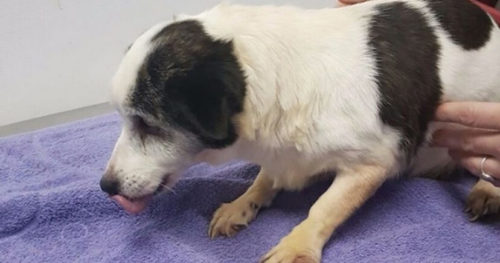 But this was not the worst but Brandy was blind and deaf, so he needed more attention and care than any other dog but for his “responsible” this did not matter. The creature was rescued by the Royal Society for the Prevention of Cruelty to Animals RSPCA, after attending a complaint. By the time the help arrived, Brandy was surrounded by his own feces and worms around him.

The terrible conditions in which Brandy lived during his last months wreaked havoc on his health. At the time of rescue, the puppy had an ear infection, intestinal worms, an ingrown and infected nail because of an abscess, an advanced dental disease and one of his eyes was swollen. We do not explain how someone could have done something as cruel as leaving the dog blind and deaf to defend himself.

The case of Brandy moved his rescuers very much because despite trying everything to save him, the creature was put to sleep to stop his agony. The animal was enduring the pain of his illnesses for months. For that reason, the RSPCA did everything to make Geoffrey Mortensen, 54, and the owner of Brandy pay for his negligence. Mortensen was brought before the law for what happened with the puppy and the chief inspector of RSPCA, Andrea Lewis, declared against him.

Andrea revealed the level of negligence that Brandy had suffered and the reasons why he had to be put to sleep, this being one of the worst cases he had attended in his career within the RSPCA. “This was an older dog, blind, deaf and totally vulnerable, who was completely rejected by his owners when he needed them most,” Lewis said. Mortensen was found responsible but served only 6 months of confinement, after having canceled a bond of good conduct for two years.

This man was also banned from having any kind of pets. Although all this falls short of all that he had to suffer before reaching peace. Unfortunately, such are the laws, so many demands increased penalties for cases of neglect and ill-treatment of animals, they are vulnerable beings! Share this note and be the voice of those who have no voice, we do not remain indifferent and discover to the world how terrible this case is.

Facebook
Twitter
Pinterest
WhatsApp
Previous articleDad! Look that what me and mom found outside! is not he adorable
Next articleCat with a single nostril lived in a construction between rocks and sand. It bloomed after its rescue