bear in kiddie pool, He wandered around the backyard and walked over to the pool, dipped a leg in the water, then got up and went to bed. He seemed so happy and renewed, ”said the owner of the house. Heat is not something that only hits us, humans. The impact is also quite suffered by animals. It is common in the summertime to see your dog wanting to bathe or your cat spinning on the ground to try to cool off in the cold ground.

In addition to the home animals, those who live in the mountains and in the jungle also appreciate the opportunity to cool off. An example of this was this huge black bear, which was recorded sleeping like a king in a jacuzzi.

The animal slipped into the property of Regina Keller, a woman who lives near the George Washington National Forest in Fort Valley, Virginia (United States). Although Keller is used to dealing with foxes, deer, squirrels in the area where she lives and has taken photographs of them for 12 years, at no time has she encountered a huge bear of almost 272 kilos (according to estimates). 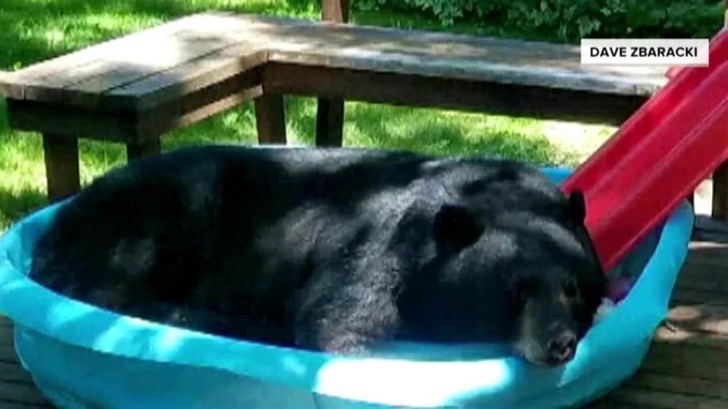 The daring animal rested for at least an hour, then was awakened by the noise of the dogs when the woman’s grandchildren arrived. The experts pointed out that the behavior of the bear should not be surprising, as they seek to cool off in the face of the growing heat wave that is experienced in North American territory, which sometimes rises to 35ºC.

“He wandered around the backyard and walked over to the pool, dipped a leg in the water, then got up and went to bed. He seemed so happy and refreshed ”