Norwegian forest cat, Norse mythology tells that two great cats called Bygul (golden bee) and Trjegul (golden amber tree) pulled the chariot of the powerful and beautiful goddess Freya. It is said that the cats were so huge and strong that not even Thor, the god of thunder, was able to lift them off the ground. These cats that transported the blonde goddess from one place to another at high speed through the sky were of the Norwegian forest race.

With his feet on the ground and with his eyes set on more mundane aspects, we tell you that this large cat ( can reach 9 kilos in weight, including females) and appearance of a lynx is not afraid of water, in fact, It is an excellent fisherman who manages to hunt its prey thanks to its great agility and speed, wide inward curved claws and a waterproof coat that shields it from the liquid element. On land, the Norwegian forest is ruthless with prey such as cockroaches, lizards, mice, and small birds.

Just because it has a pronounced hunting instinct does not mean that the Norwegian forest is not friendly to people at all. With the humans he meets, he is sociable, very playful (also being an adult), and may even meet at the door when someone from the house comes home. With strangers, he is shy and can avoid contact.

This kitten does not require great care, basically regular brushing to keep its lush coat free of knots and the administration of malt to prevent hairballs from forming in its stomach. Although he enjoys nature (climbing trees, hunting animals, getting into the water …), if he has to live indoors, he will do so willingly and in fact, he will be very happy. It is a very adaptable cat that will appreciate a few moments of play with its human.

Would you like to know more about this particular breed of cat? We tell you all about the Norwegian forest, the cat from Scandinavian fairy tales, and faithful companions of the great goddess Freya.

A cat of legend

The Norwegian forest appears in Scandinavian fairy tales. In Norse mythology, it is the animal that pulls the chariot of the goddess Freya. 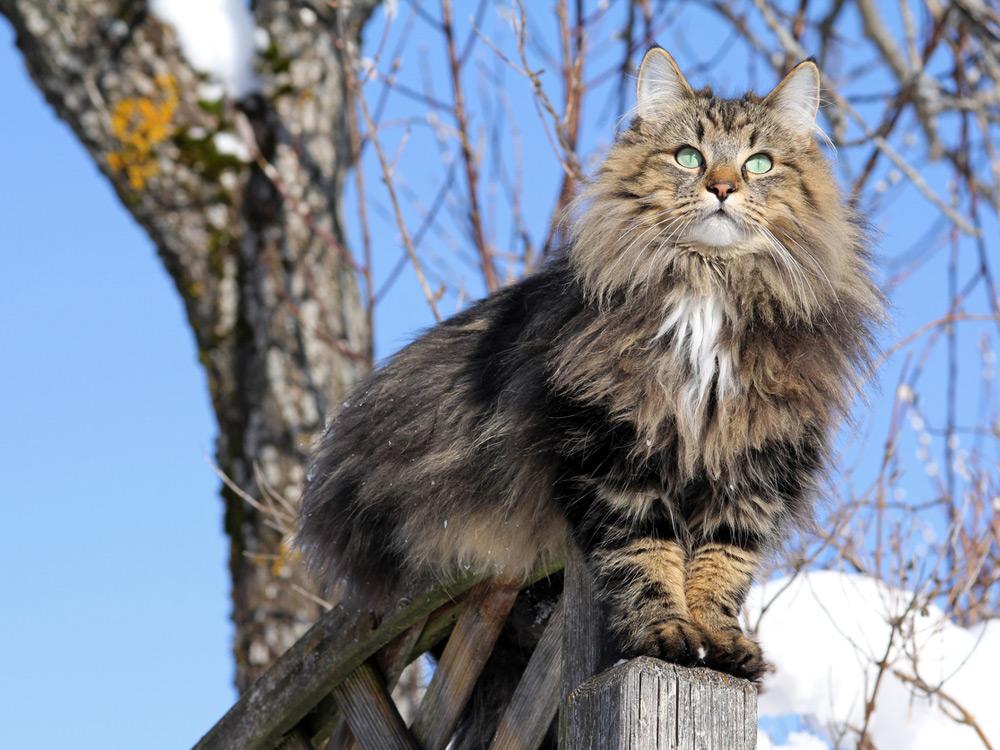 The origin of the Norwegian forest

Although its exact origin is not known, certain theories point to the year 1000 as the date on which the Vikings brought it to Norway from the Middle East. They are thought to have been used to protect ship cargo from mice and later these cats adapted to their new habitat. In 1979 they would arrive in Germany and the United States, in 1980 in the United Kingdom, and in 1982 in France. 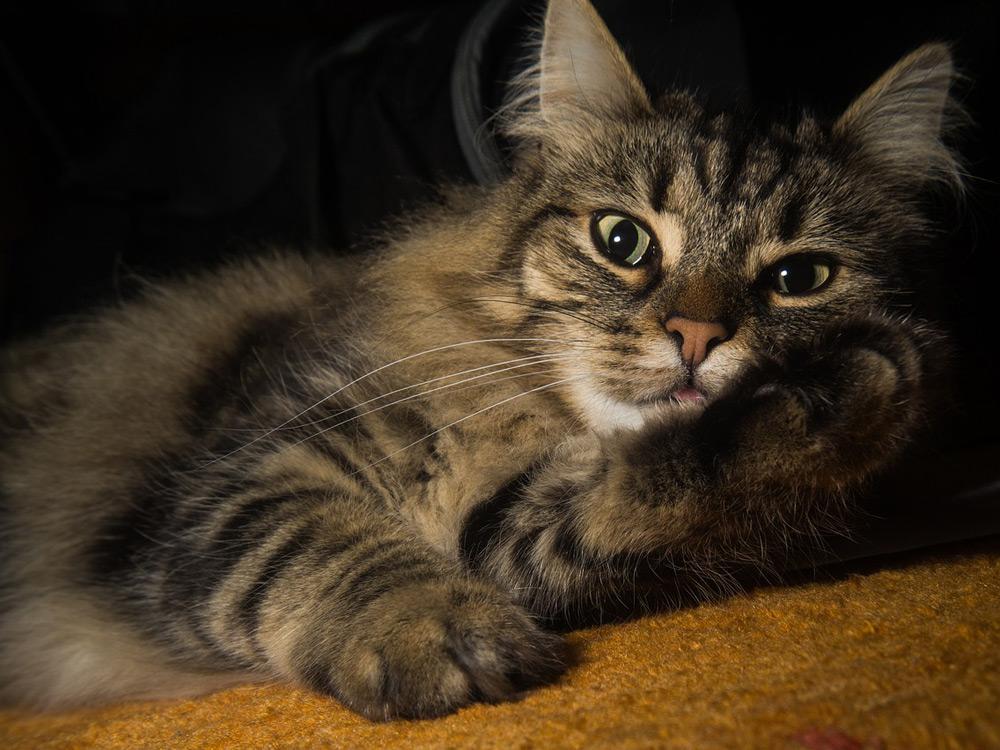 The character of the Norwegian forest

This cat is friendly and sociable with people he meets but is shy around strangers. In fact, they usually avoid them by hiding in some corner of the house. He is also very self-confident and emotionally stable. 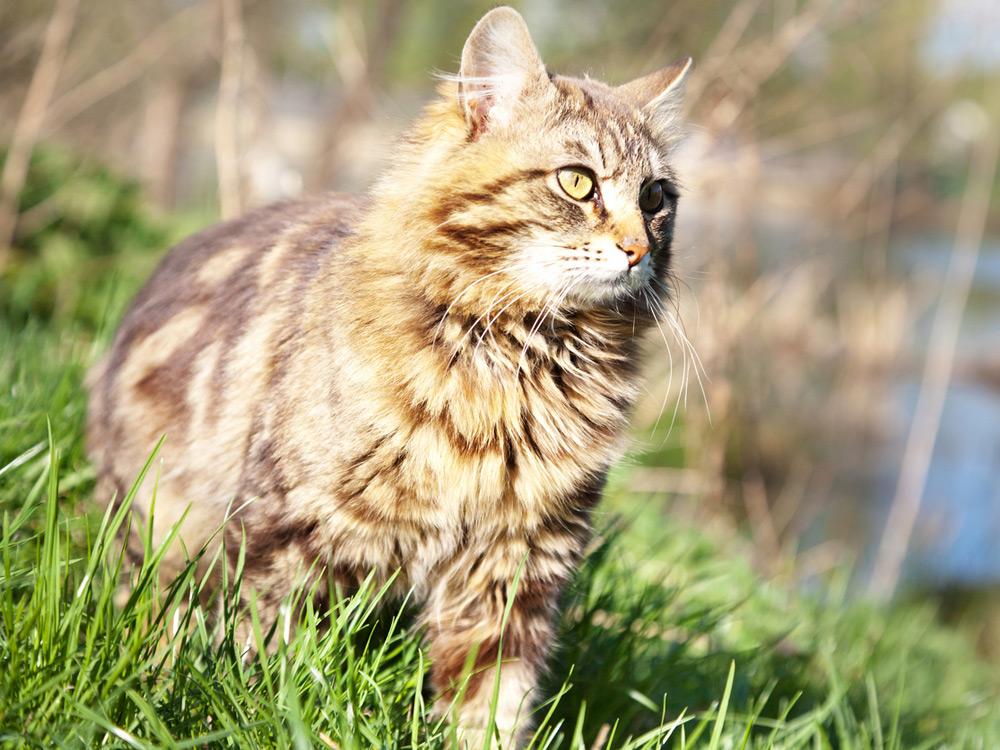 A more agile cat than it seems

Don’t be fooled by its “plump” and falsely plump appearance, the Norwegian Forest Cat is an excellent climber, jumps so easily that it appears to have springs in its legs, and is a ruthless hunter. 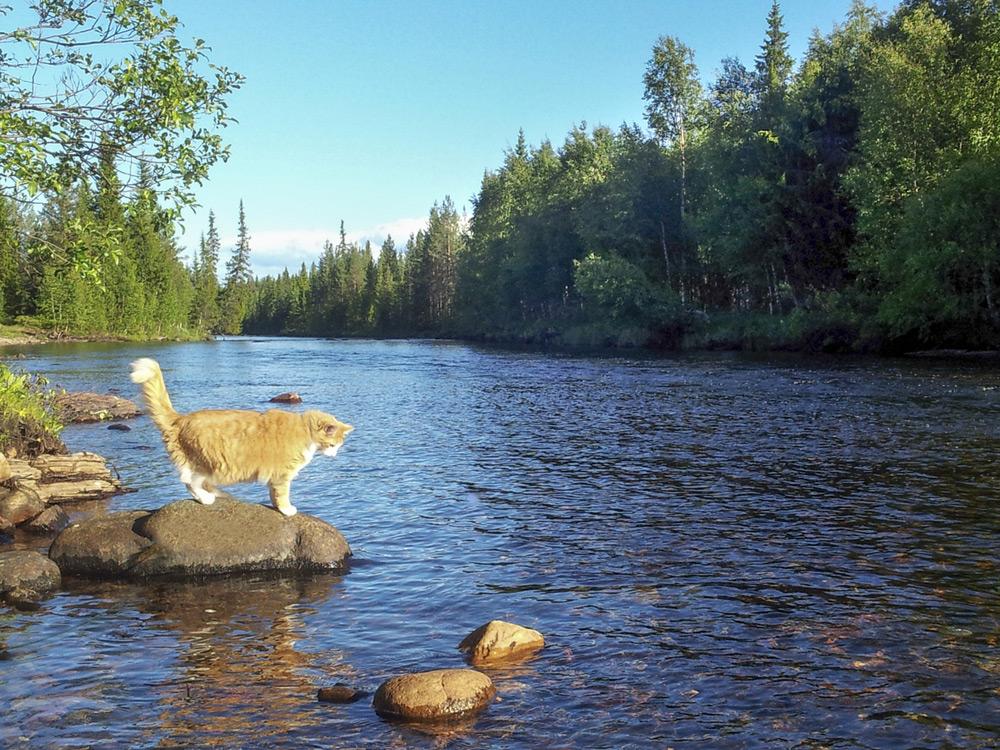 The Norwegian forest cat has great fishing skills inherited from its ancestors. It is one of those kittens that the water does not push back, but quite the opposite. Its waterproof coat will shield it against water. 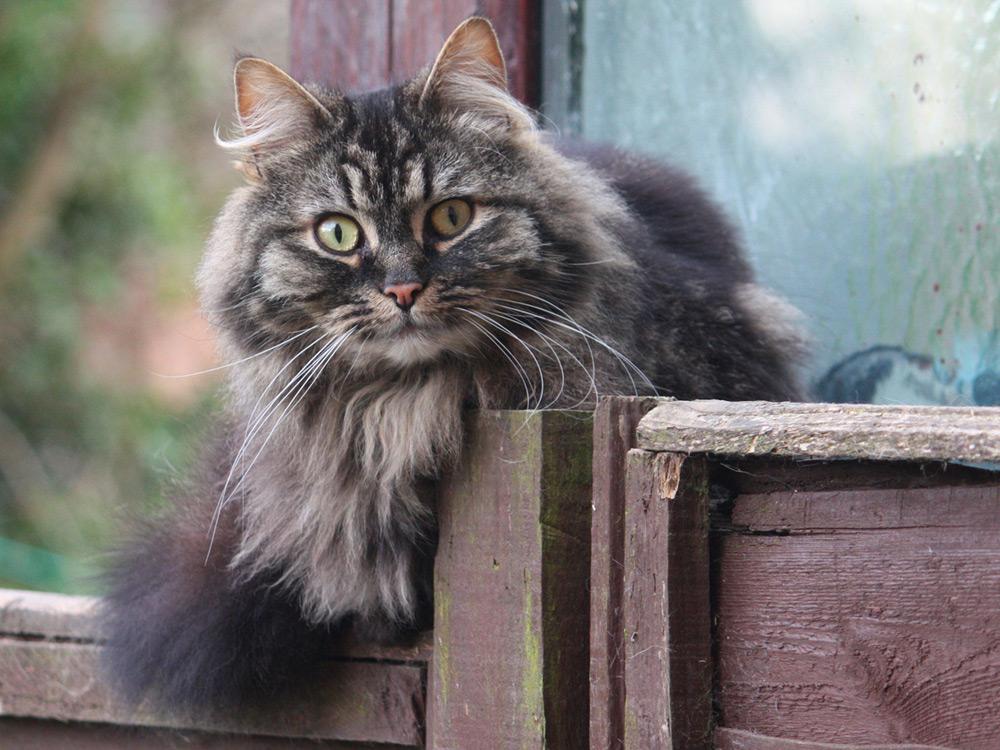 This breed of cat loves to rest in high places where it can control everything. If you haven’t seen it at home for a while, you might find it if you look it up. 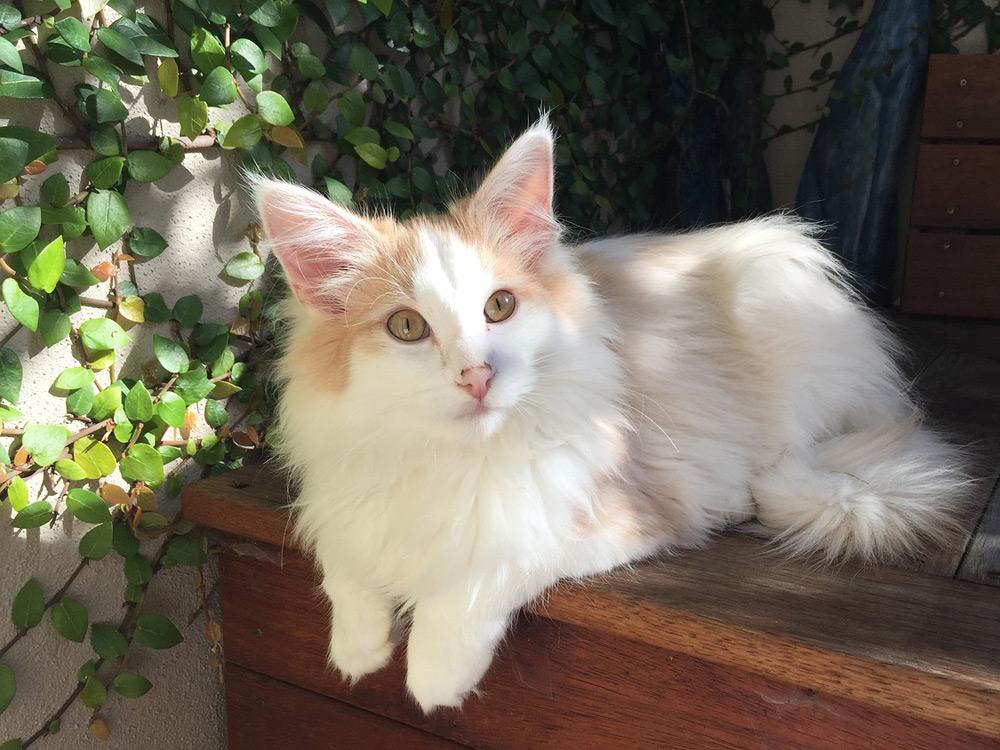 The Norwegian Forest is a healthy cat

As a general rule, this kitten is in very good health, but as a big cat, it can suffer from hip dysplasia (yet another reason why it doesn’t have a pound extra). He is predisposed to retinal dysplasia and type IV glycogen storage disease. 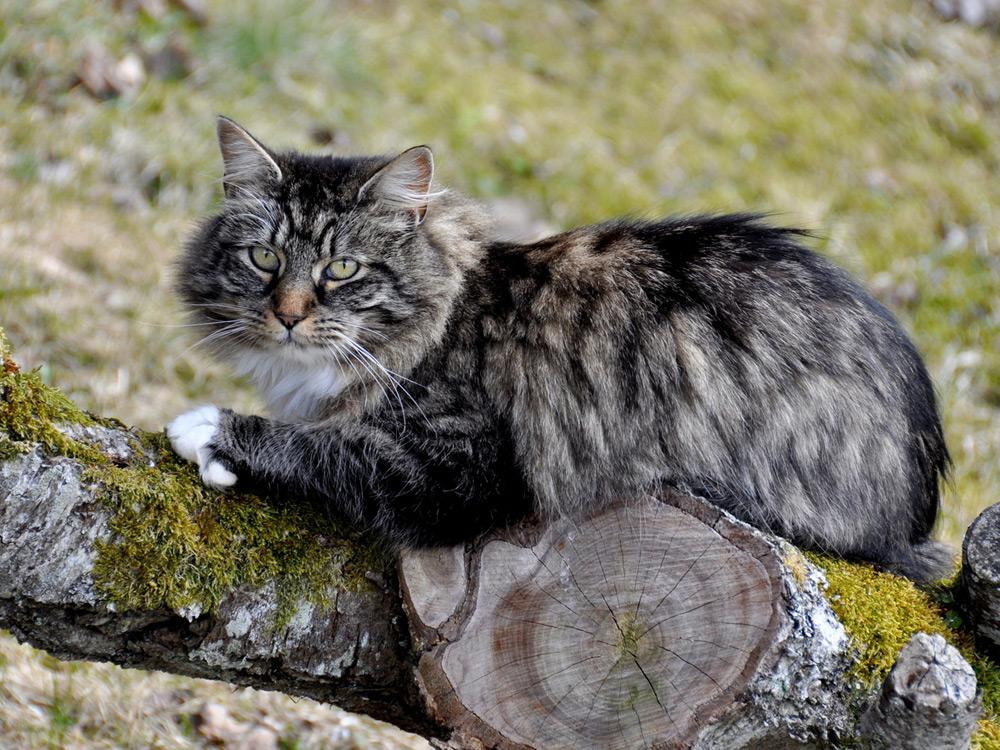 Has a waterproof coat

The Norwegian forest coat is made up of two layers: a very dense and woolly undercoat and a smooth, shiny, slightly oily-looking undercoat that is waterproof. 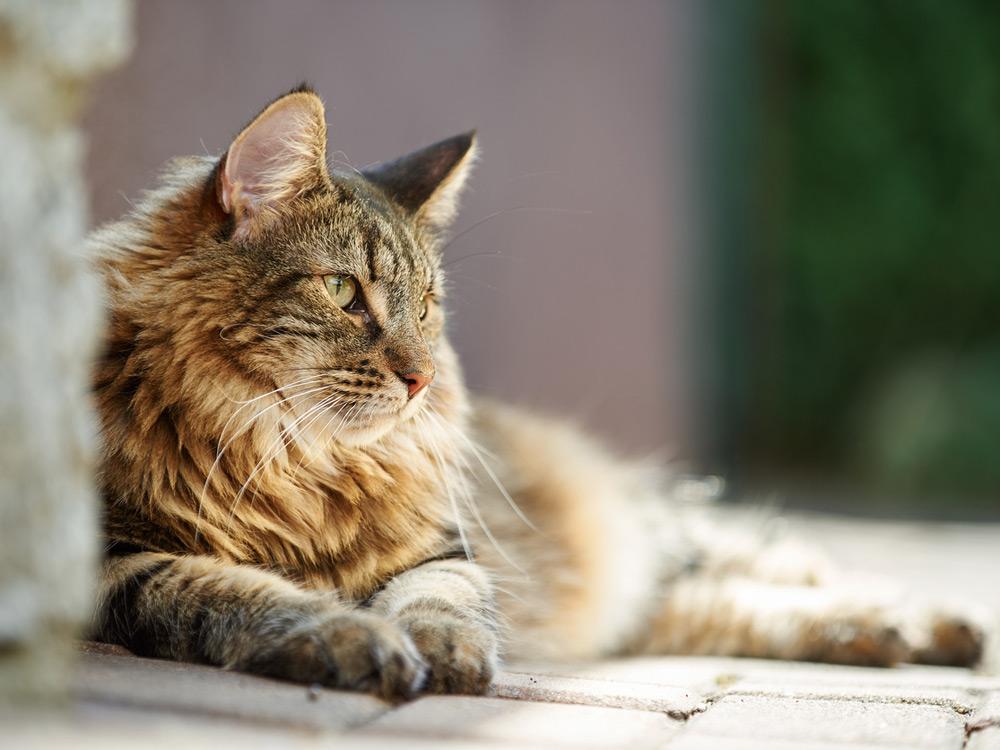 Related to the Maine coon and the Siberian

It is not surprising that the Norwegian Forest is a family of the Maine coon and the Siberian cat. Have you seen how similar they are? 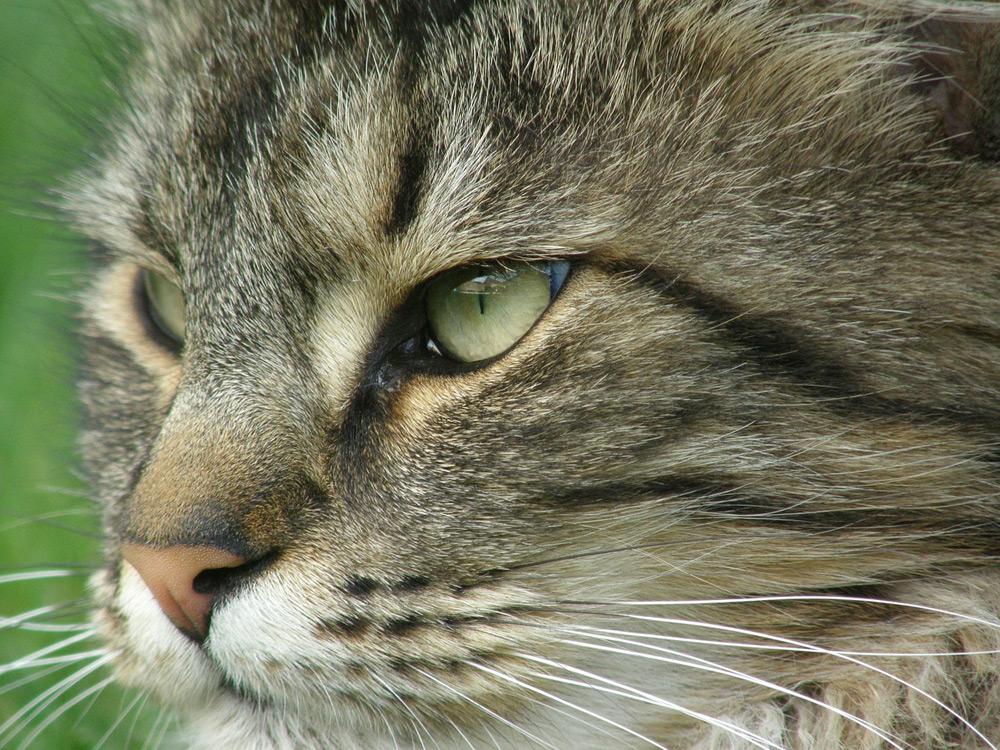 Has a very soft meow

It’s funny but from a big and powerful cat like the Norwegian forest, you would expect a powerful meow. Well, nothing is further from the truth, the meow of this feline is soft and delicate. 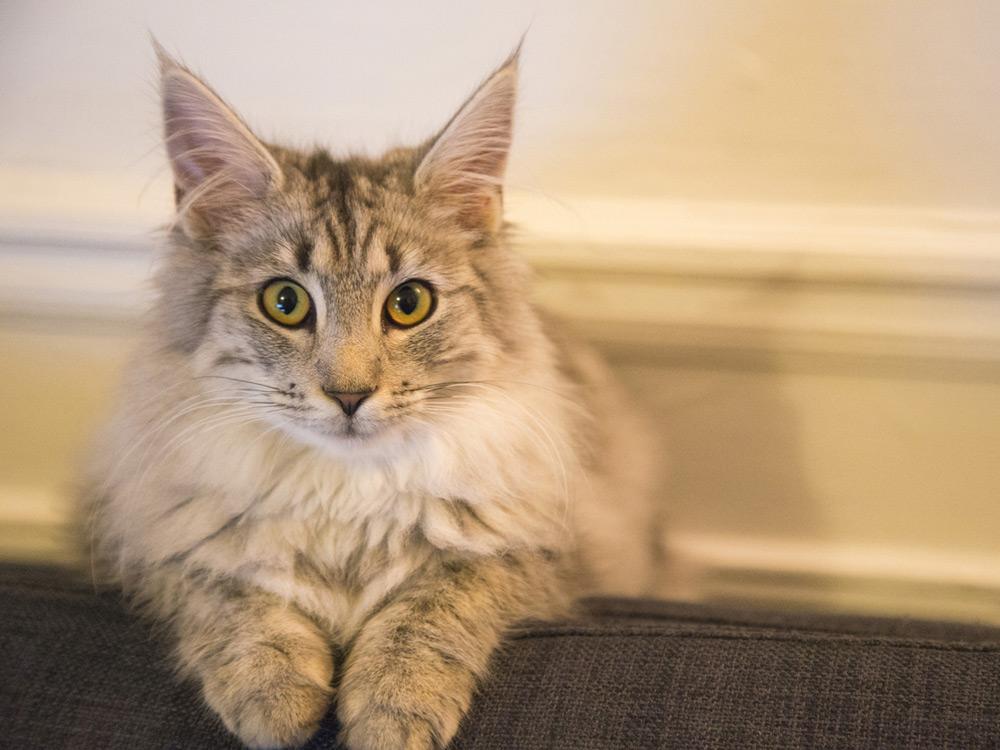 You have no problem if you live indoors

Although this cat enjoys being in contact with nature, living indoors is not a problem for him. 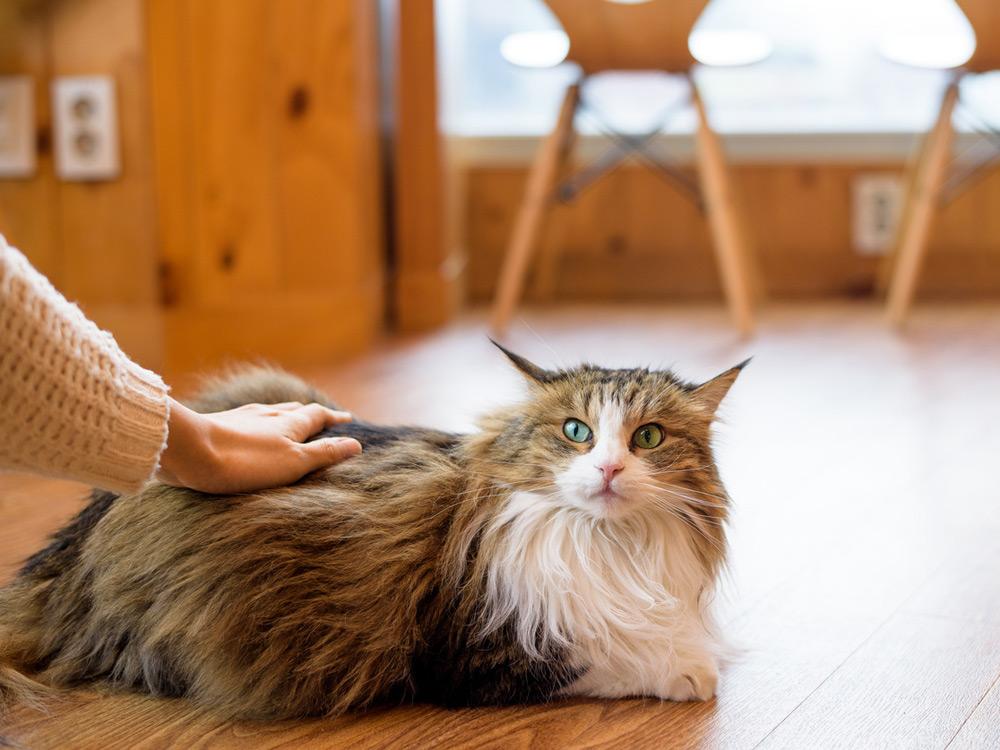 The Norwegian Forest loves to play. He even gets distracted by a ball of silver foil! 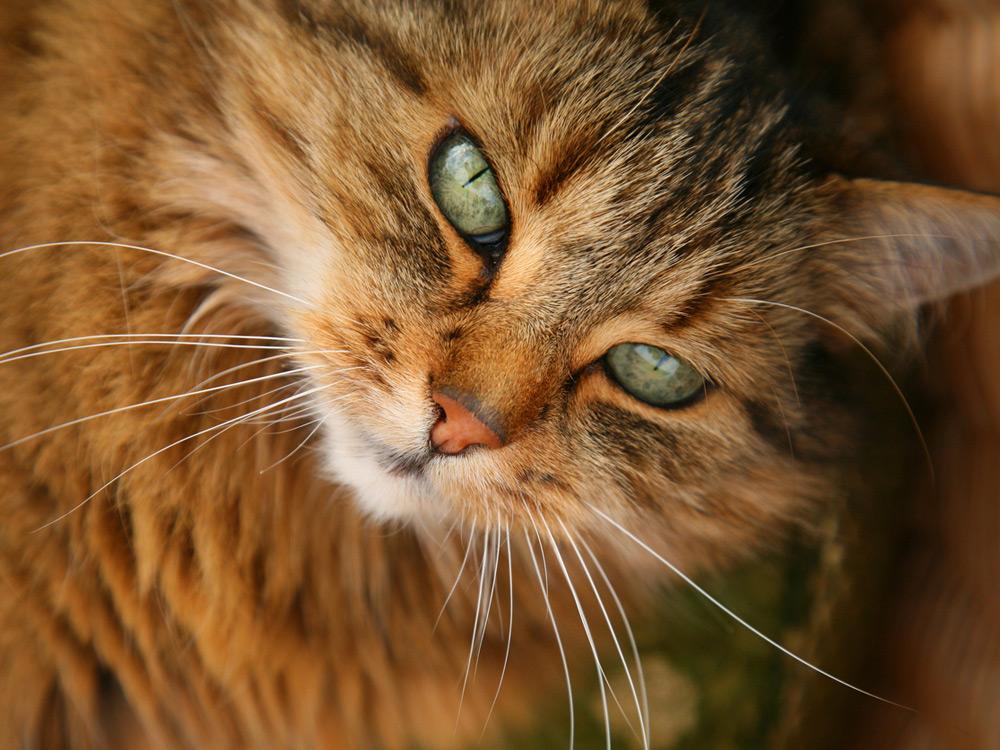 His lush hair is not very laborious

Despite what it may seem at first glance, its lush coat is not very difficult to maintain. Of course, it requires regular brushing and it is advisable to give the cat malt so that hairballs do not form. 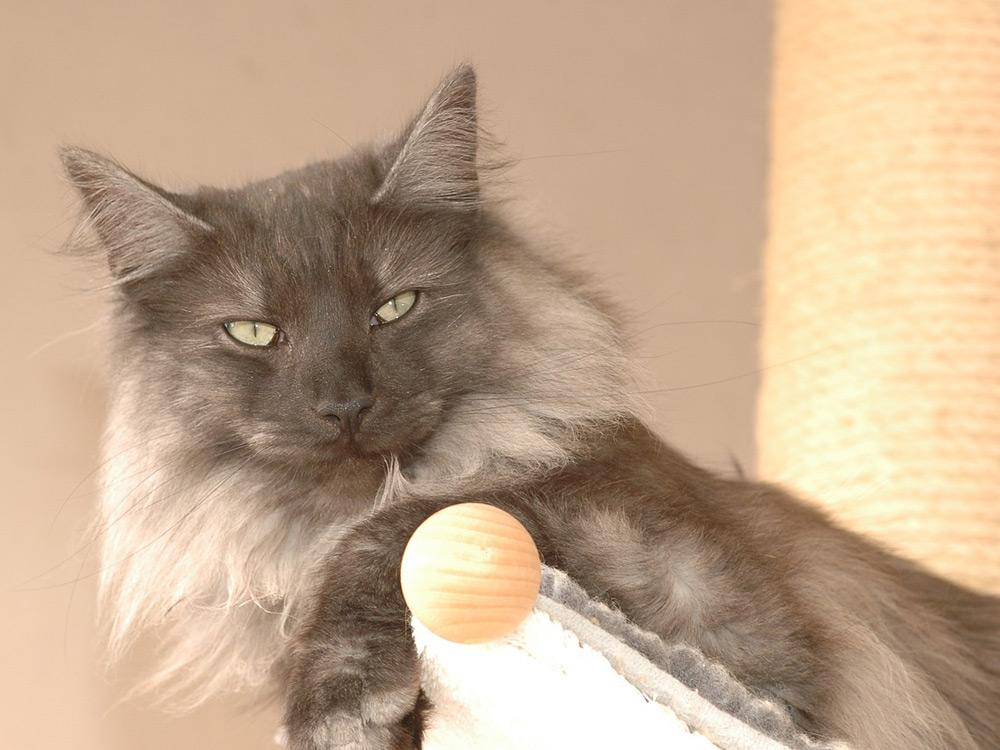 With heat, the cat loses a lot of hair

Cold weather is in its DNA, so when it’s hot, it loses a lot of hair and it seems that it stays in the middle. Brushing is especially important here, to help you get rid of the undercoat and so that it does not fill the whole house with it. 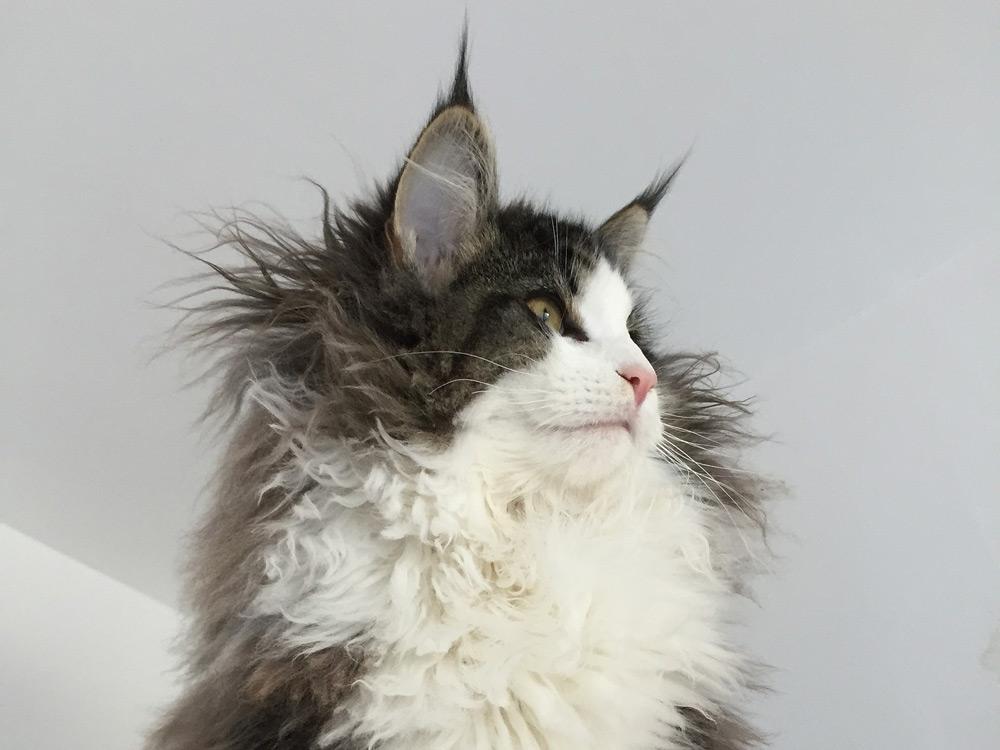 If you look closely at the face of this cat you will see a certain resemblance to the lynx. The tufts that stick out of his ears are known as lynx brushes.

Hereditary diseases, such as hypertrophic cardiomyopathy or type 4 glycogenesis, are some of the reasons why regular veterinary check-ups are recommended, a good choice of cats for mating, and avoiding those carriers of the genes mentioned above.

Responsible breeders want the complete well-being of their kittens and their parents, so they don’t skimp on the expense or effort it takes to take them to the vet to determine who carries the problematic breeding genes.

When looking for your new friend you should trust only those sensible breeders and not get carried away by those ads in which pedigree kittens are offered at low prices.

For pedigree kittens to be sold so cheaply, it is the kittens themselves that have already paid the consequences, since engaging in responsible breeding is a very expensive hobby. 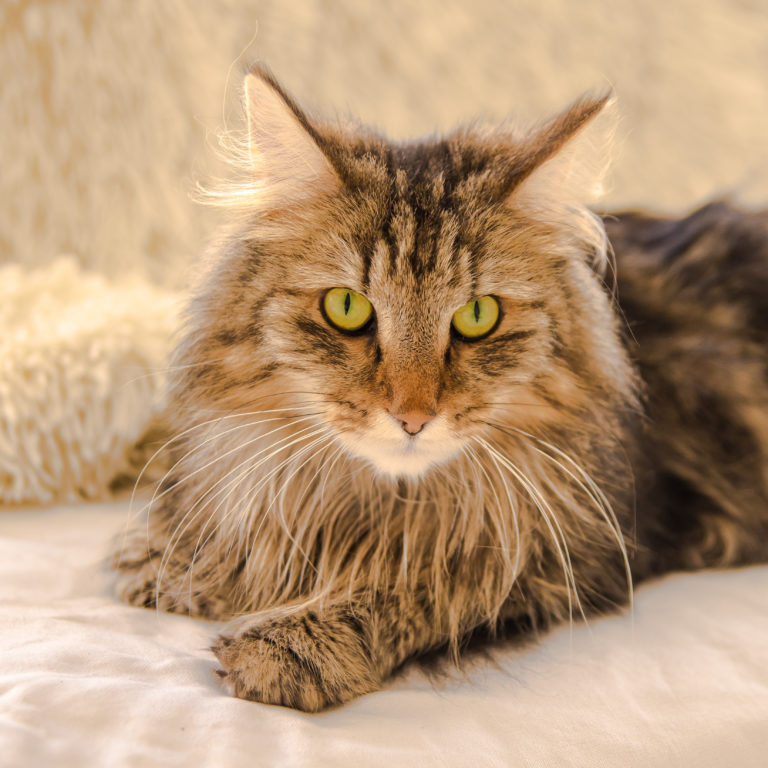 In addition to covering the costs, the breeder also has to dedicate time to the well-being of his cats, for example, offering a balanced diet to both the pups and the parents and taking them regularly to the veterinarian to receive the corresponding vaccines. These breeders invest what is needed in the first veterinary check-ups where, for example, cardiac ultrasound is required to diagnose hypertrophic cardiomyopathy. The kittens will live the first twelve weeks with the mother and their siblings, with whom they will socialize and learn the minimum before moving in with their new family.

To all these expenses must be added the fees of the breeders’ associations, in addition to what the castration is worth and other additional expenses. So all of this comes at a price. A cat that is not going to be used for breeding can cost between 700 and 1000 euros. With what the breeder earns, he covers the expenses without obtaining a large profit.

Since not all lovers of kittens have the money to pay these high amounts, animal shelters are an alternative and you may find the Norwegian forest of your dreams there. But remember one thing: Norwegian woodlands are very sociable cats and shouldn’t live without a companion!

We wish you a wonderful life next to your Norwegian forest!