Big Dog Breeds: In standard measurements, it is believed that a canine has large proportions when it tends to measure more than or equal to 40 centimeters tall. Although this type of dog is commonly considered as those to fear, it does not have to be like that, since everything will depend on the breeding that is offered to them, thus finding different dogs to choose from. So we will show you the breeds that are considered the best today so that you get an idea of ​​which one you can have.

This is characterized by being one of the oldest breeds in the world in terms of dogs, with solid features and ranging from 78 centimeters high. Although you should not think badly, despite the dimensions, this breed should not be a cause of fear, because according to the way in which they are educated they can become very gentle and loving. 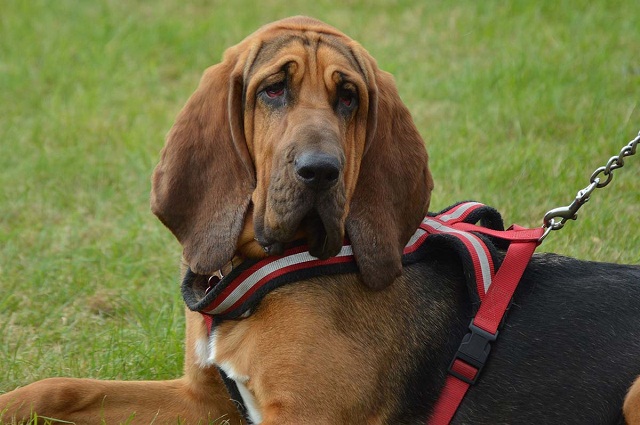 According to its name, this is a breed originally from the USA and has an average size of 55 centimeters high. It certainly comes from the Foxhound but English, showing a very cautious temperament, and with an active and affectionate personality when it is proposed, it is also considered one of the best dogs to accompany in the hunting of the moment. 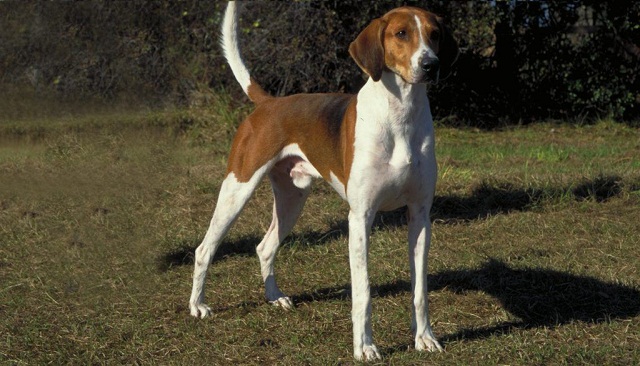 This breed turns out to be very noble and faithful, but has as its main characteristic good handling when hunting. Its height varies between 5o and 70 centimeters, being able to be really peaceful, calm, and intelligent. A burly canine that will undoubtedly provide you with excellent company for a long time!

When mentioning large breeds of dogs, a Rottweiler comes to mind almost immediately. Although these are among the medium to large breeds, it has a height of 50 to 75 centimeters. Counting on powerful and dominant aspects, with a coat or mantle that is usually black and intimidates even the most courageous, due to its strength. Being also a proud and intelligent dog that of course is very determined. 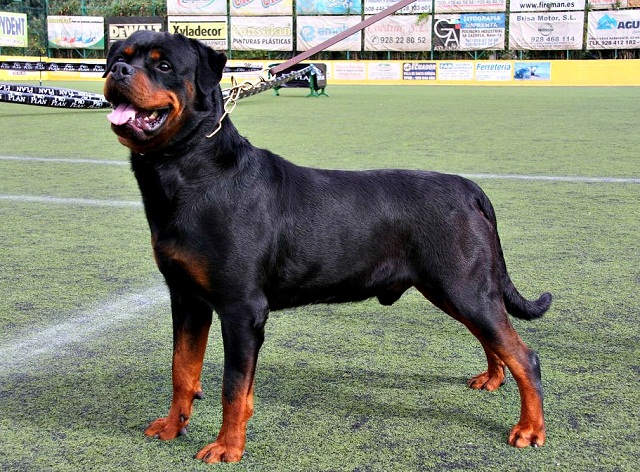 Because it has long and voluminous hair, the Belgian Tervueren Shepherd in this case is considered among the largest and most popular canines of the moment. And the truth be told, this dog is known for being elegant and having an unmatched bearing, measuring like a Rottweiler but without being so intimidating. Likewise, this dog stands out for being really affectionate with its owners, until it can be cloying. 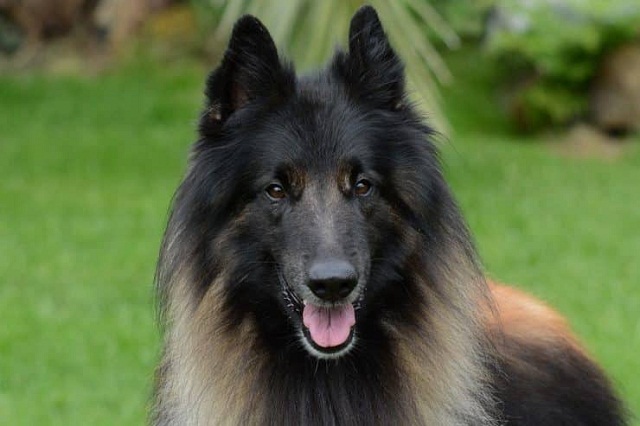 Usually, the name “terrier” is given to small breed dogs, this being of course an exception. It is a perfect dog for guard and defense, being very active and even somewhat aggressive, so it requires great physical activity and therefore exercises to live peacefully. They are ideal dogs for houses in the open! Even as a standout feature, it can weigh more than 100 kilos. 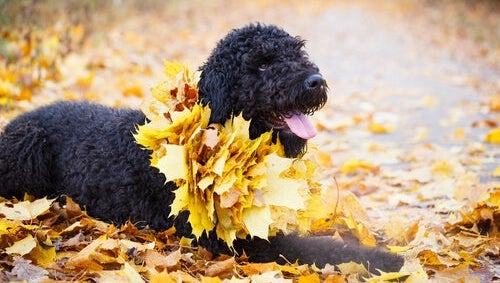 It has an appearance similar to that of a wolf although it is really unknown to most people. It tends to have a somewhat timid and cautious character, despite the fact that it has an imposing and very intelligent appearance, thus being a completely suitable dog to take on walks. Speaking of its height, it ranges from 65 centimeters, being necessary to do a lot of activity with the dog so that it can remove its stress and live healthily. 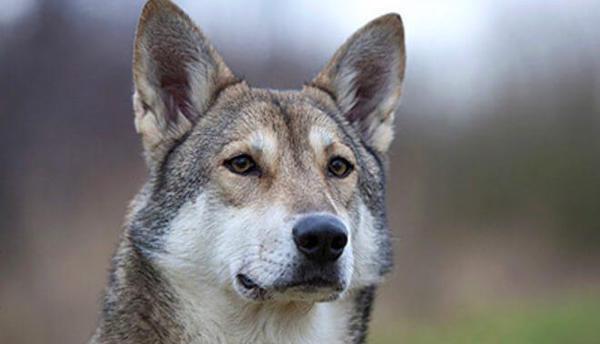 Fidelity is what stands out most of this breed that comes first hand from South Africa. They are usually somewhat discreet, although despite this they enjoy quite a bit of physical strength, making them ideal for surveillance work, taking them hunting, and even with sports. Of course, it is a dog that can live without problems inside the home, being one of the few breeds of large dogs recommended when you have small ones at home. 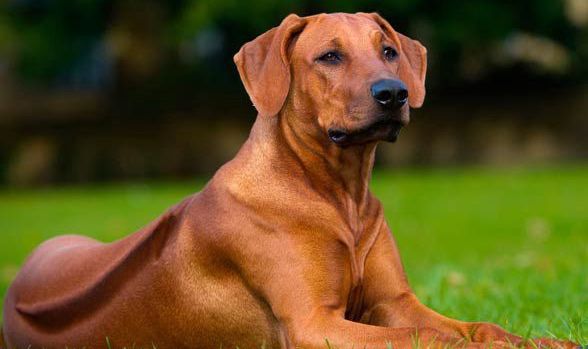 One of the classics when talking about large breeds of dogs, which is usually seen as a police assistant because it is the one used by these law enforcement officers to work. In addition, the practicality of the breed is out of the ordinary, since it can do everything as long as it is educated for it, making this dog both a defender and a guard and above all a friend. Well, they have an attitude that can adapt to that of its owner with complete peace of mind. 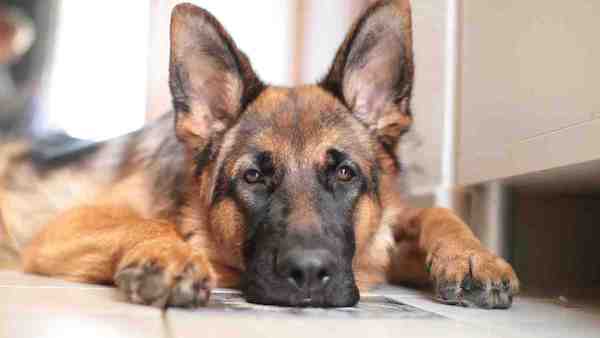 Even called Japanese Tosa being more than beautiful, faithful, and reserved. Likewise, it predominates for having a height that exceeds 55 centimeters, being able to be as effective as it is strong depending on how the animal is raised. So, without a doubt, it is an excellent dog for those looking for breeds that do not require so many demands. 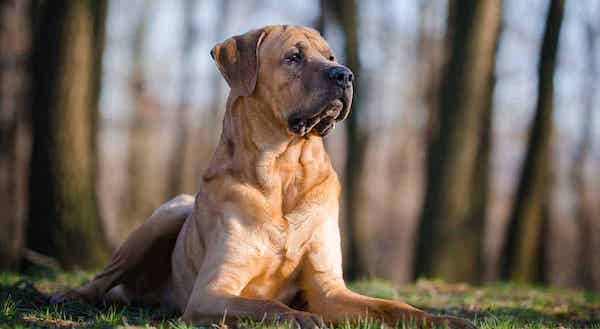 Male German Mastiffs can grow up to 80 cm tall, females slightly shorter, but they are not far behind in majesty either! The weight of German Bulldogs is usually around 60 kg since they have very muscular and strong bodies.

If you are looking for a watchdog you might consider the German Bulldog as an option. However, keep in mind that this is a dog that needs a lot of space to live comfortably, in addition to getting a lot of exercises every day. If it does not burn all its energy, the German Bulldog will adopt aggressive and compulsive behaviors. It is very active!

The German Bulldog stands out for having copies of the breed included in the Guinness Book of Records for their size. For example, the late “Giant George” was a German mastiff that stood over 1.10 m tall and weighed 111 kg. Contrary to what you might imagine, he was tremendously good and calm, and the poor man was afraid of water! 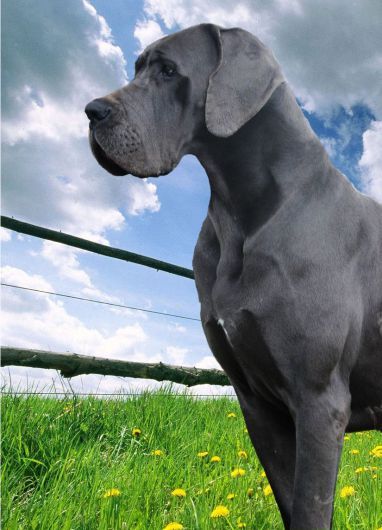 Saint Bernard is one of the most famous very large dog breeds, thanks to the movie “Beethoven”. He has an expression that inspires kindness and is the favorite dog of many families around the world.

You will need plenty of space to play and run and a master who knows and can handle you. Saint Bernard is extremely heavy and his movements can be somewhat jerky. If you want to have one, get ready to buy sacks and sacks of feed! Saint Bernard eats a lot. If you wish, you can consult our article on the most gluttonous dog breeds.

This dog needs daily brushing to keep his coat in good condition and hygiene in the eye and mouth area; tends to drool. A Saint Bernard, on average, usually weighs around 90 kg and is up to 80 cm tall. 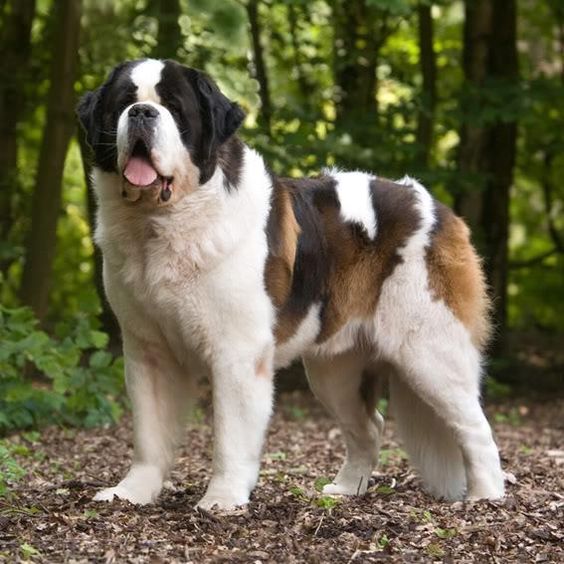 Eat a lot, up to a kilo and a half of feed a day! and requires a bath every 3-4 weeks. In addition, it is very important that you have a good space where you can exercise. This giant dog needs a master with experience in dealing with dogs and with leadership skills.

The Neapolitan Mastiff is on our list of very large dog breeds because it can grow to around 70cm tall and weigh up to 60kg. 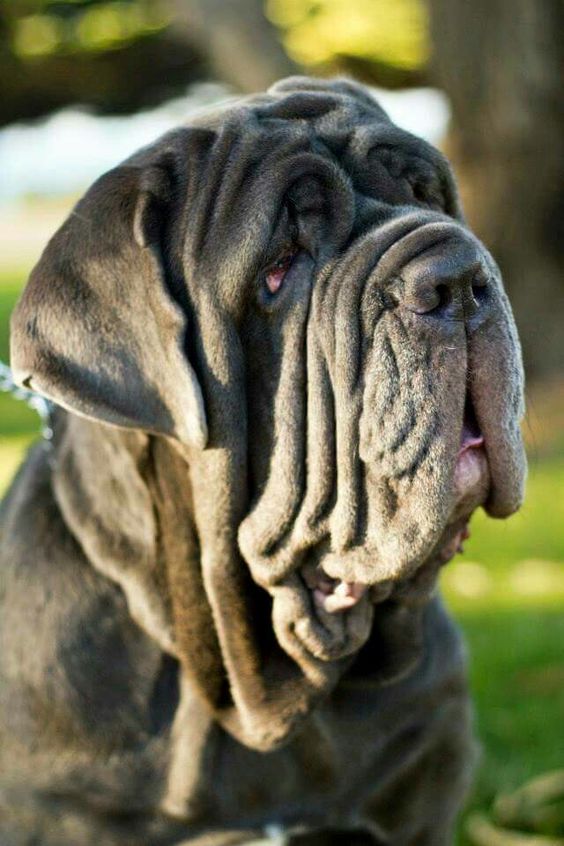 This dog, of German origin, has long, tawny brown hair. It is a large, muscular, and strong mountain dog with a balanced temperament.

The Leonberger is around 80 cm tall at the end of its growth and weighs about 75 kg. He is physically very imposing, but his demeanor is very calm. It has a bearing very similar to that of a lion.

You need a lot of exercises every day, but can be a bit lazy at times. Encourage him to walk and play! Also, you should brush your hair every day. Leonberger hates loneliness and being tied down. He likes being able to run and move freely. 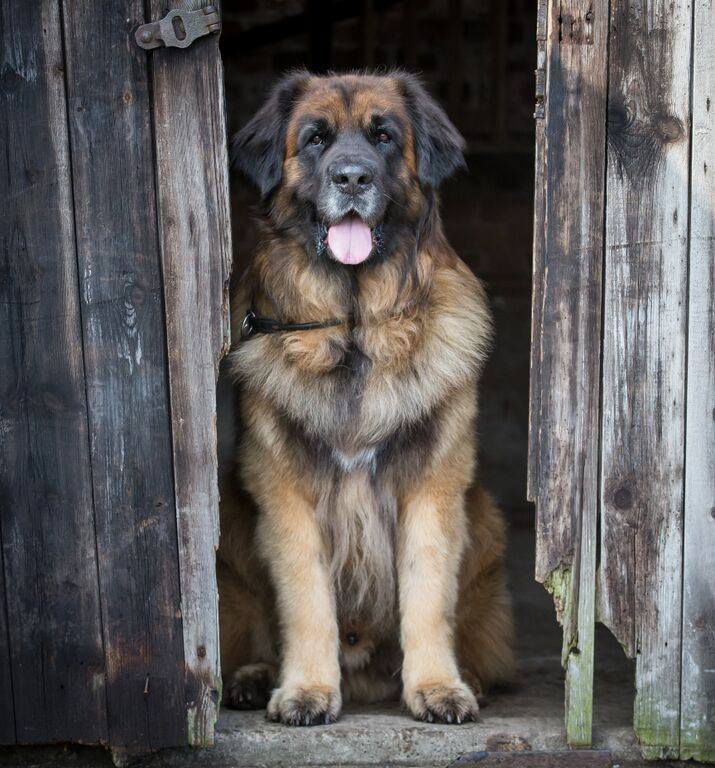 Our next very large breed of dog is the Bullmastiff, a canine of British origin related to the Mastiff and the English Bulldog. He has an imposing appearance and is an excellent watchdog of surprising intelligence. His need for activity is moderate and he is quite obedient when it comes to obeying and abiding by codes of conduct. The bullmastiff is a very familiar dog.

The height of an adult bullmastiff can reach almost 70 cm and the weight can approach 60 kg. It is a breed with a certain tendency to obesity, so its diet must be taken care of.

The hygiene of the bullmastiff is not very complex, a couple of weekly brushings and a bath a month are enough. 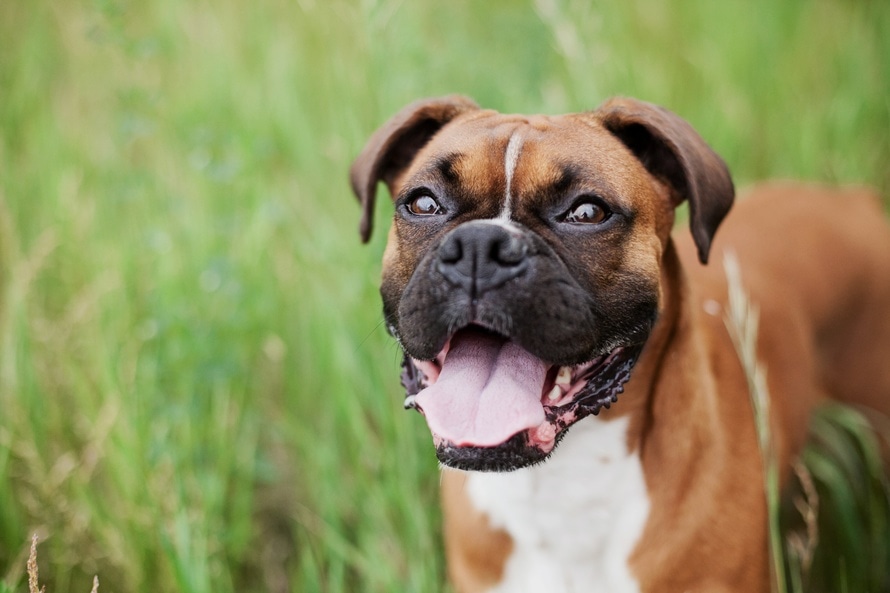 The Newfoundland is one of the most famous and appreciated giant dog breeds in the world. It is a dog that weighs around 70 kg and is between 60 and 80 cm tall. The Newfoundland is an extremely good and sweet dog with a fascinating innate ability to swim. They are very loyal and caring, on many occasions they have served as life-saving dogs.

The Newfoundland is a dog that needs to go for a walk often, and loves excursions; he does not like being locked up. If education is not correct, it can become dominant and destructive, but a well-trained and socialized Newfoundland dog makes a delightful pet. 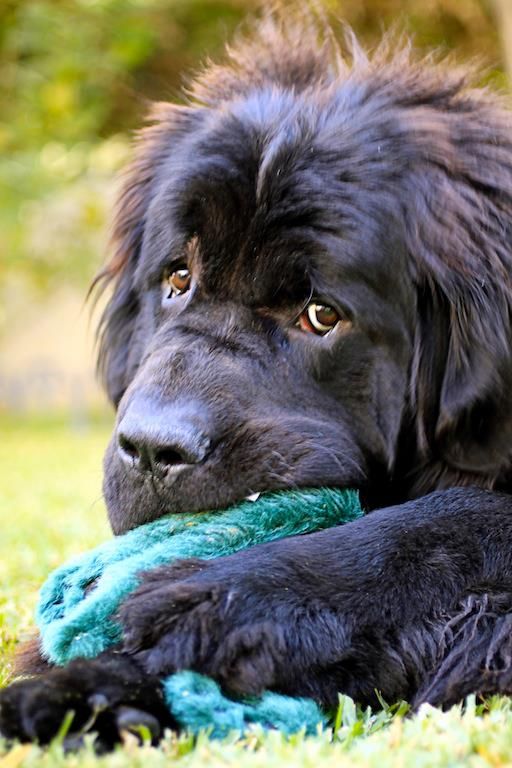 We continue our very large dog breeds by talking about the Czechoslovakian Wolfdog. This dog is a hybrid that still retains the mentality and instinct of wolves but has a lot of potential and predisposition to be trained.

He is around 65cm tall and weighs about 25kg, significantly less than the other large dogs we’ve seen. The Czechoslovakian Wolfdog has a great hunting instinct.

It is recommended that you have your own toy that you can chew on because if not, it will chew on everything in its path. Your hair also requires daily care. The Czechoslovakian wolfdog is prone to hip dysplasia at an advanced age. 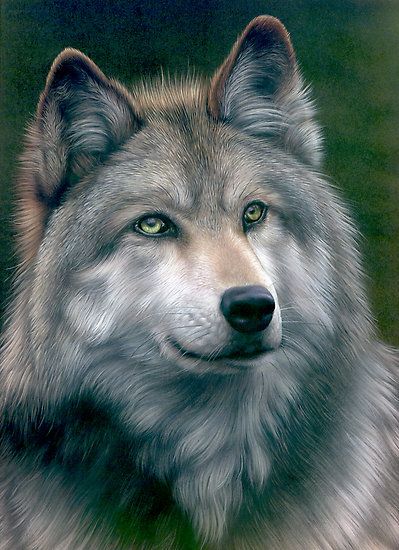 The Brazilian Fila dog breed is a mix between the Mastiff and the Bulldog, a dog of great physical strength and enviable smell. Formerly it was used to hunt escaping slaves.

The Brazilian row can weigh more than 55 kg and measure 70 cm. It needs the care of a master with the wood of a leader. You can be suspicious of strangers and feel threatened, so your socialization is very important. 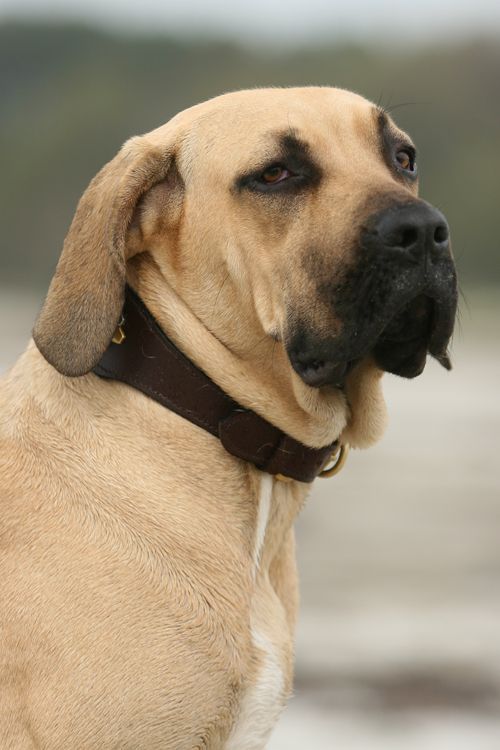 Of French origin, our next very large dog breed is the Dogue de Bordeaux. It is a very familiar, affectionate, and faithful dog with its loved ones and neutral with strangers.

The Dogue de Bordeaux is 65 cm tall and weighs about 65 kg. He is very calm and gentle, in addition to being protective of his family, especially children.

You can develop heart and skin problems. You need a lot of exercises to expend your energy and build your muscles. 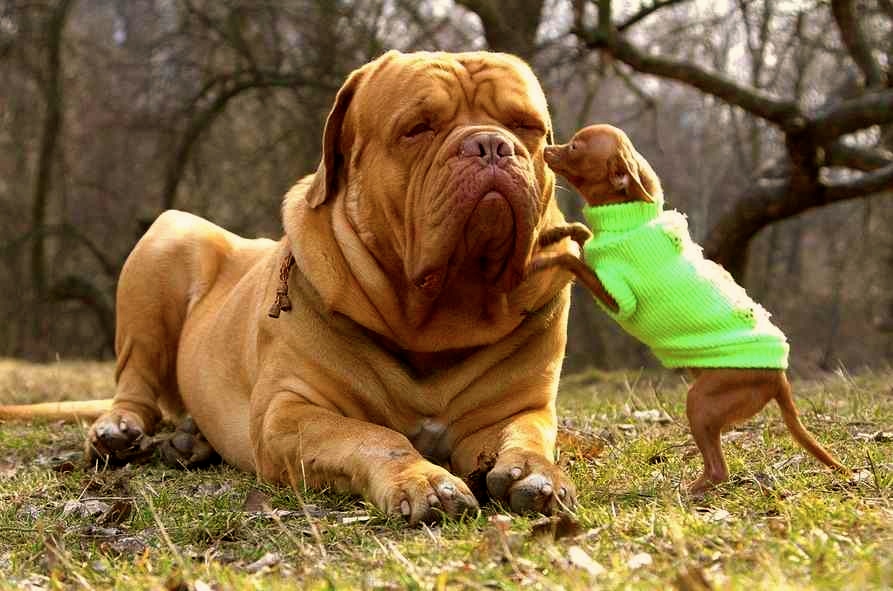 The Tibetan Mastiff or Tibetan Mastiff is a guard and defense dog of Chinese origin. Its bark is very powerful, similar to the roar of a lion. It was widely used by the Assyrians as a war dog and spread throughout the Mediterranean as the Romans conquered this territory.

With his family, even with children, he is loyal and loving; With strangers, by contrast, the Tibetan Mastiff can be fierce and fearsome. Its approximate height is an impressive 80 cm and it can weigh 70 kg. 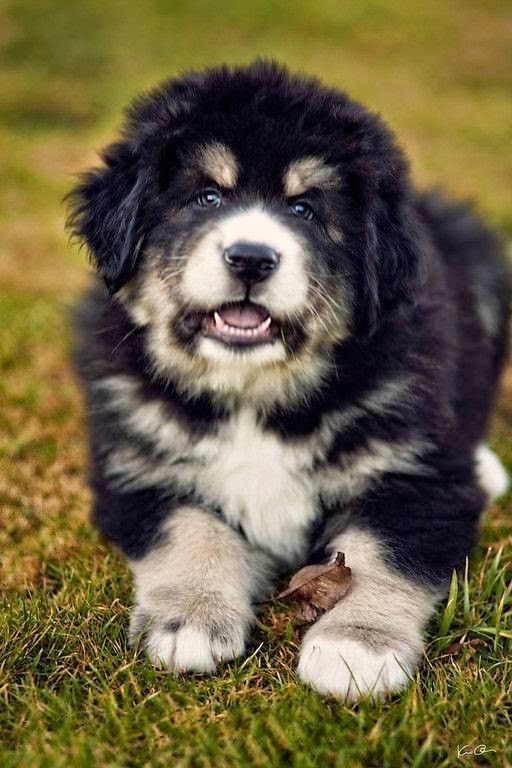 It is simply now to know a little more about the care of a large dog and, above all, to choose the one that best suits your way of being, so you can have the biggest and strongest dogs on the list as a reference.

Why do large dogs live less?

This is largely due to the free radicals that affect this class of canines, when they are at an early age they have a very fast metabolism, consuming greater amounts of energy, even higher than small breeds when they are puppies, so this causes a lack of control that in the long run, that is, when they become adults, takes its toll on them or that is when it really affects them, causing cellular damage that in turn shortens their life span.